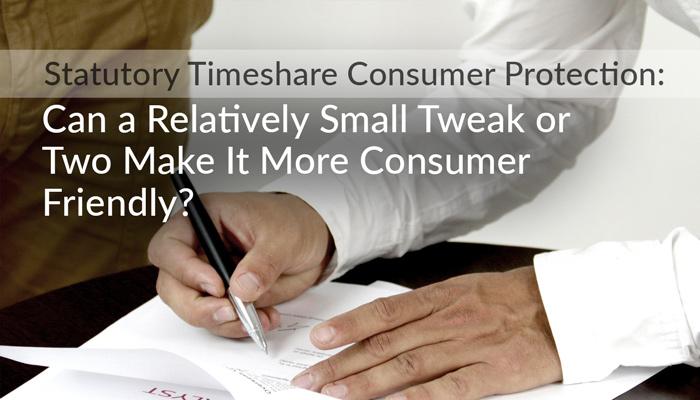 I think it’s probably fair to state that timeshare purchasers could and should have meaningful protections in place to ensure that a purchase decision can remain an overall positive consumer experience.

Understanding that many timeshare purchases are quite literally unplanned and unbudgeted until the very day they are purchased is essential to understanding the potential predicament of the consumer, who really didn’t have the opportunity to do any up front due diligence on their purchase prior thereto. Put another way, timeshare purchases are not typically advertised on television or in magazines, and are not easy products to research, even online. New purchasers typically don’t wake up one day and decide to purchase a timeshare. Far more likely is the scenario that the buyer was induced to attend a “presentation” that very day. Timeshares are, practically by definition, probably the ultimate “impulse buy.”

The two most significant consumer protections that presently exist via state statutes are:

1.) Purchaser receipt of a voluminous packet of documentation containing a lot of important consumer information about the specifics of the purchase, called a public offering statement (POS), the contents of which have been previously filed (and approved) with the respective state in which the timeshare is to be sold; and

2.) A five- to ten-day rescission period, (depending on the state of purchase – Florida is ten days), counting from the day following the date of purchase. Therefore, if information in the POS leads the consumer to determine the purchase decision may have been unwise, an option remains to cancel the contract without penalty. In other words, if upon further informed reflection, you wish to change your mind, the only legal opportunity to do so is within that five- to ten-day rescission period!

Many state laws, including Florida’s, provide for an extension of the rescission period if the resort fails to provide that essential information packet, known as the public offering statement (POS). The additional time is calculated by starting the rescission period from the time the POS is ultimately received by the purchaser. This allowable legal extension to the cancellation period underscores the importance of receiving and reviewing the POS in a timely manner, and acknowledges the important role the POS can and should play in the ultimate decision to purchase and retain, or rescind, a timeshare interest.

Together, the interplay between these two statutory directives – that is, POS receipt with timely review, plus the statutory allowable rescission period – form the core for consumer protection in the timeshare arena. Missing the drop-dead date of the cancellation period, something that’s easy to do if you’re not paying a lot of attention, can cast an unsuspecting purchaser into a proverbial timeshare hell. Not timely absorbing the contents of the state mandated POS means you truly have missed the opportunity to fully understand the essentials of what you’ve purchased.

Let’s now examine how the timeshare industry has managed to almost entirely circumvent these minimal but essential consumer protections – with the complete buy-in and support of the regulatory agencies whose arguably sole reason for regulating timeshare sales is to protect the consumer from unwise purchases.

In Florida, the primary regulatory agency whose duties statutorily include consumer protection for timeshare consumers is the Department of Business and Professional Regulation – the DBPR.

The timeshare industry has, over the years, developed an innocent enough looking form to circumvent the previously referenced rescission extension, known as the “Acknowledgement of Documents Received,” or a document used in the closing process that is similarly worded. Given the significant number of documents the timeshare purchaser signs at closing, it is both appropriate and important for the consumer to acknowledge receipt of each of these documents as he/she receives them, especially regarding the POS – an absolutely essential document for the consumer to possess, given its aforementioned role in protecting consumer rights.

In fairness, acknowledgement of receipt and possession by the purchaser also protects the developer from an argument that the consumer/purchaser might otherwise be tempted to make: that he/she never received the POS, and therefore could claim his/her rescission period was still wide open days, weeks, or even months after the closing and, in doing so, demand a cancellation and full refund from the poor defenseless developer!

With that being said, don’t fret too much about the poor defenseless developer, as they, with absolute control over the closing process, are one step ahead of us here. In fact, the developers have perfected the paperwork-handling process by having the purchaser(s) initial and sign the acknowledgement of receipt of all documents, (particularly the POS), literally while the purchaser is engrossed in the process of signing all developer presented documentation, from the purchase contract, to the disclaimers, to the POS, and so on and so on until all documents are initialed and signed, an event occurring prior to the purchaser actually receiving any of the documents of which they are ostensibly acknowledging receipt!

This voluminous stack of paperwork is then carefully gathered up by the developer’s agent and taken away to another room for “copying” purposes. When the purchaser’s copy of the pile of papers is returned, it is typically already encased in a folder in a manner that looks attractive, but also discourages opening or an immediate review of same by the purchaser(s). The purchaser is then repeatedly congratulated and ushered out the door with their attractive packet in hand. In other words, the consumer is actually acknowledging receipt of important disclosure documents well in advance of a future time when they are handed a packet, presumably and hopefully containing all documents that they previously acknowledged in writing that they had already received!

In my opinion this is an incredible, and quite unnecessar,y over-exercise of trust in the developer’s good intentions, given the relatively easy way one can acknowledge receipt of a document as one actually receives it!

It should be noted that the purchaser does not, at this stage, have access to his/her purchase. That is not slated until a future time, be it weeks, months, or years away. Needless to say, it is absolutely well beyond the expiration of the statutory rescission period. As the purchaser(s) leaves the closing with a bundle of paperwork all neatly encased in a holder, they are generally not encouraged to inventory the actual contents of the package. Therefore, if the POS document is omitted, whether intentionally or not, then the purchaser is bereft of any real ability to inventory his/her documentation. The insidious aspect of this line of reasoning is that, if the purchaser isn’t diligent in both checking for the presence of, and thereafter carefully and promptly reviewing, their POS, then that purchaser’s rescission period will expire in a maximum of ten days with no legal basis for extension, because, whether he/she actually received it or not, the resort has a signed acknowledgement that the POS was delivered to the purchaser.

At Finn Law Group, our fixed procedure is to carefully review all documents provided to the purchaser, now our client, by the resort; in a significant number of cases, the POS is not provided to us by the client. When we ask specifically for that document, we are nearly always advised by our clients that they have indeed provided to us every single item received by the resort, with no exceptions. In this case, either the client is mistaken, or they in fact, didn’t receive their POS.

It is quite frustrating to us that we cannot then ably argue for an extended rescission period because of possible resort misdeeds. What’s sorely needed is a DBPR-imposed rule requiring the resort to alter their closing procedures so that the purchaser only ticks off items received as the buyer actually receives them. I suspect the DBPR is quite aware of this issue and could easily impose this procedure to insure proper compliance.

Another item the DBPR could easily tweak is to require the public offering statement to be enclosed in the purchaser’s take-home packet in the same manner and medium as the balance of the items in the buyer’s packet. In other words, the POS needs to be provided to the purchaser in exactly the same format, on printed paper, as the balance of the received materials in the packet as in the purchase contract, etc. and not in the form of a CD or worse, a web based password or access code to a resort provided website.

I refer now to the DBPR’s recent ruling that the developer may “deliver” the POS in an “Alternative Media Format” such as a link to a website, or a CD, both of which require the buyer to have access to either the internet via a device or a CD player to properly review the information received. In my opinion, delivery, the word used by the applicable statute, means to hand to your buyer a printed copy, not to hand them something that, at best, constitutes a possible future delivery. Such a procedure at best delays the purchaser’s ability to see the essential information. At worst, the consumer may never see the document.

Since the maximum ten-day window for review is already quite small, any obstacle to viewing and reviewing, beyond the day of closing, decreases the possibility that the purchaser will take the opportunity to sit down and carefully read the multi-page disclosure within the allotted time. Once the rescission period has passed, virtually all consumer protections are off the table. Disposing of your timeshare interest after the expiration of the rescission period is its own nightmare, one I’ve referenced in other articles.

In conclusion, the two suggested “tweaks” I am herein recommending be adopted by the DBPR will cost it nothing in terms of needing to extend its enforcement resources since these tweaks require nothing else from the DBPR than an announced change of policy and procedure, but would immeasurably bolster and make effective again the statutory consumer protections that are already in place, but have been so watered down and effectively circumvented by the timeshare industry that their protective value has been reduced to a fraction of what they once were!