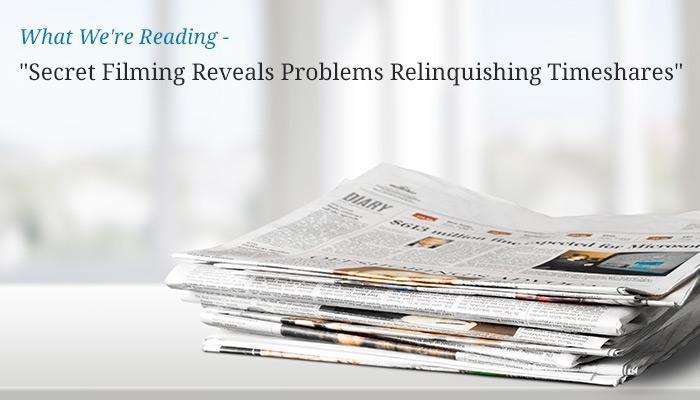 Consumers who once bought a timeshare but now find themselves unable to keep up with their obligation – due to an illness, a lifestyle change, or a budget crunch – often find themselves with fairly limited options.

The timeshare “resale” market is, as a rule, confounding (at best) or nonexistent (at worst); direct negotiation with resorts without legal representation can quickly lead to a dead end; and, worst of all, the internet is full of scammers offering the promise of relief as nothing more than a quick way to dupe eager consumers out of their money.

Does it make you feel better or worse to know that the situation is largely the same for timeshare owners “across the pond?” Because it certainly is as fraught and trying to exit a timeshare obligation in the U.K. as it is here in the U.S., if a recent report from BBC Scotland is to be believed.

The story, “Secret filming reveals problems relinquishing timeshares,” follows two sets of people trying to exit a timeshare contract – one a family unable to keep up with their interest due to a family crisis, the other an undercover consumer expert.

The family in question, the Byrnes, a retired couple, can no longer afford the physical taxation of travel; in trying to relinquish their timeshare contracts, however, the Byrnes have faced a two-year negotiation battle with their resort. As the BBC explains:

“Mrs Byrne said: “We got a letter from our timeshare provider saying we could buy ourselves out. We could pay them to take it from us.”

Her husband added: “It would cost us over £3,000 for the two timeshare weeks, they wanted to take it off my hands and charge me for it. The thing’s absurd.”

The Byrnes have been trying to negotiate with [their resort company], but, at the moment, they are still locked into paying a maintenance fee of £1,600 every year.”

So while the Byrnes’ resort company touts the efficacy of its “practical exit mechanism for owners,” the couple has, seemingly, been left high and dry.

Things don’t fare much better for the story’s other subject, financial journalist Fergus Muirhead. As the BBC reports, Muirhead went undercover to make contact with one company claiming to be able to “help dispose of an unwanted timeshare.” Instead of a simple transaction, however, the reporter soon found himself in the middle of a complicated scheme, wherein he was “encouraged to buy other products for a future financial return.”

“It was clear from the outset that the company had no intention of paying me money, and in fact they made out that it was my misunderstanding of the phone call that led me to believe that any cash would be forthcoming.

I was presented with a number of options but it was clear from the questions I was being asked that I was being driven down a well-worn path towards the payment of a fat fee to them in return for some ‘credits’ that I could sell back to some other people at a later date. Oh, and my mum’s timeshare would be taken off our hands as part of this process.

All I know is that I was being asked to get my credit card or cheque book out on the day when I thought I was going to be given a cheque.”

For more details from these fascinating stories – including a conversation with one British lawyer preparing to launch a case against the timeshare disposal company – we encourage you to read the full post at the BBC.