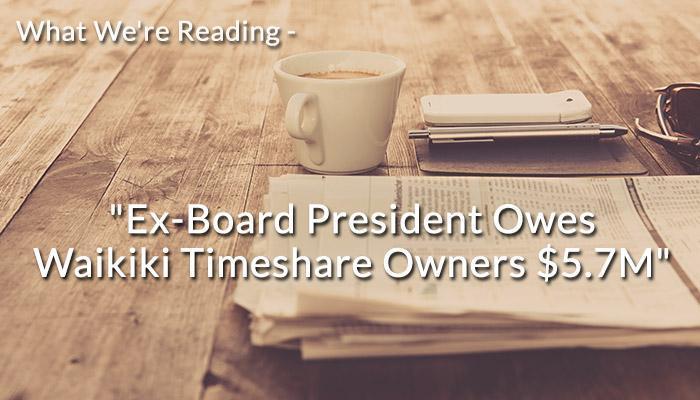 Imagine paying up to $400 a night for a Hawaiian timeshare unit, only to find the space full of dilapidated furniture, cheap art, and short-circuiting electrical systems.

That’s exactly what happened to owners and guests of Waikiki’s Lagoon Tower, according to an excellent, detailed feature in the Honolulu Star-Advertiser.

According to the paper’s report, “a state Circuit Court jury awarded the association of Lagoon Tower timeshare owners $5.7 million in damages to be paid by the association’s former board president after a 10-day trial in April.” Terrence Revere, the local attorney who filed the lawsuit back in 2012, said the award is the “largest he’s ever seen nationwide against a director of a property owners association,” according to the Star-Advertiser.

The board president in question, Mark Barra, a Connecticut banker and former employee of the Bank of Hawaii, apparently colluded with a “small furniture maker with a retail store on Kauai” led by one Louis Marshall Jensen, according to the Star-Advertiser.

After striking up a relationship with Jensen on another timeshare update, for a resort in Kauai, Barra pushed the Lagoon Tower board to allow Jensen to bid on the work, failing to disclose that he had a financial stake in Jensen’s company, Resort Environments. That “arrangement,” according to the Star-Advertiser, “involved Barra receiving $10,000 a month from the company for ‘consulting’ services that included accounting, shipping, inventory and wire transfer work.”

Barra reportedly shared a competitor’s designs with Jensen during this time. And when Resort Environments was selected, according to the Star-Advertiser:

Barra pushed for change orders, took two trips to Indonesia at board expense and also was reimbursed for meals tied to oversight. At no time did he disclose that he had a financial stake in the company.

The collusion wasn’t discovered until 2011, when a representative of an interior design firm met with Henry Perez, the Waikiki timeshare property manager for the developer behind Lagoon Tower. “During the conversation the [interior design rep] mentioned to Perez that Barra owned Resort Environments,” according to the Star-Advertiser. The article continues:

The Summa official agreed to return with Barra’s Resort Environments business card. In court, Revere displayed the card and cited an email exchange between Jensen and Barra discussing such a card for Barra. In the email quoted by Revere, Jensen asked what job title Barra should have, to which Barra responded: “How about principal/money dude?” then added, “Chief conflict of interest guy could work too.”

Following the trial, the “jury’s award said Barra must pay the Lagoon Tower timeshare owners $2.4 million in special damages, $250,000 in general damages and $3 million in punitive damages. It’s possible that Barra could appeal.”

For even more on the story – including the details of the shoddy projects that Jensen and Barra allowed into Lagoon Tower – including “substandard” furniture, short-circuiting reading lamps, and art described as a “piece of crap” – we encourage you to read the full story at the Star-Advertiser here.