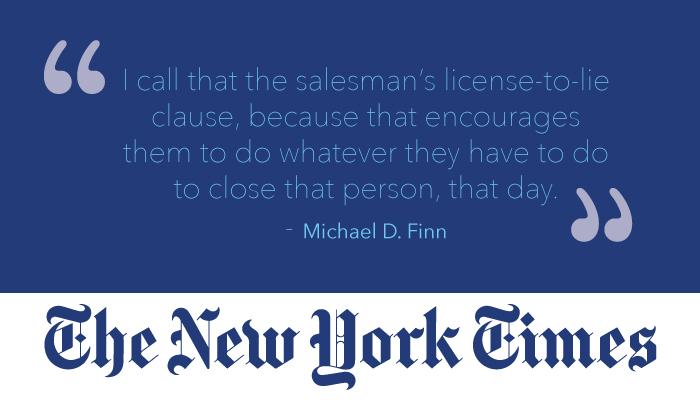 The New York Times recently wrote an article on the complex legal facets of timeshare ownership, featuring quotes from our own Michael D. Finn.

Titled “The Timeshare Hard Sell Comes Roaring Back,” the Times piece focuses on the sales tactics of Diamond Resort International, noted in the industry for its “aggressive” pitches, according to the Times. A Florida lawsuit filed against the company in 2015 claims that Diamond pressured timeshare owners to upgrade to “programs to fleece more and more money out of the plaintiffs.”

The Times asked our firm to weigh in on the industry more generally, noting our expertise with helping timeshare owners walk away from their obligations. Here is what we said…

“Every timeshare contract I have ever seen contains a clause with a phrase something like ‘I did not rely on any oral representations in order to make my decision to purchase this timeshare… I call that the salesman’s license-to-lie clause, because that encourages them to do whatever they have to do to close that person, that day.”

Speaking about the industry generally, Mr. Finn said that buyers are often led to believe they are making a real estate deal and that their holding will have a value that they can recoup in a resale or pass on to their children.

“Nothing can be further from the truth,” Mr. Finn said.