What We’re Reading – ‘Fraudsters Admit Their Part in £850,000 Timeshare Scam’ 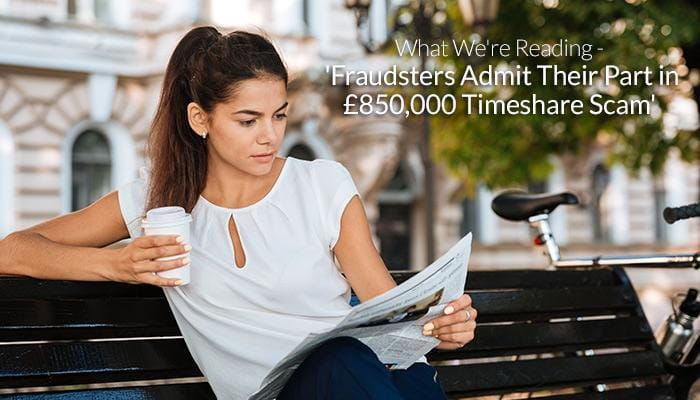 Another week, another reminder that timeshare resale scams are not simply an American problem!

That fact was brought into remarkable relief this week, courtesy of an article from the Eastern Daily Press, a paper from the U.K. According to their report, two men are currently awaiting sentencing, following their admission that they took part in a timeshare scheme that “took around £850,000” from “hundreds of unsuspecting timeshare owners.”

In total, the scheme involved as many as nine individuals; the two in question “were said to have been involved in money laundering offences during the two-year scam,” according to the Daily Press; five others have already admitted to “being part of a conspiracy to commit fraud,” and two others “admitted offences of fraudulent trading.”

Unfortunately, the details of the scam in question will read as all-too familiar to many Americans.

According to the Daily Press, the plan involved “making bogus claims that there were buyers for people’s timeshare facilities in Spain and other areas of the Mediterranean.”

As the report explains:

“timeshare owners were approached between 2012 and 2015 and offered a chance to sell and that buyers could be found and the owners were required to pay ‘notary fees’ up front to complete the sale.

West Mercia police fraud investigators had identified around 470 people who were deceived – who were mainly elderly and vulnerable – and that at least £850,000 was taken by the fraudsters.”

As the prosecutor elaborated in court:

“People paid between £600 and £1,500 hoping that their timeshare would be sold, but it was all dishonest and just a serious lie.”

In all, this story is an important reminder to American and British timeshare alike owners to stay vigilant when it comes to their timeshare interest!

Timeshare resale scams, which prey on those consumers desperate to get out from the burden of an unwanted timeshare interest, regularly manage to separate timeshare owners from thousands of dollars every single year, often using tactics precisely like those described above – that is, promising the existence of a buyer who never materializes and requesting the wiring of money or cash payments upfront, before any services are rendered.

For more on this international timeshare story, we encourage you to read the full report over at the Eastern Daily Press.

For more on how to spot a timeshare resale scam, we encourage you to read what the FTC and BBB have to say. Above all, remember to take every offer to sell your timeshare interest with a grain of salt, and don’t hesitate to reach out to consumer protection officials in your state with any questions or concerns.