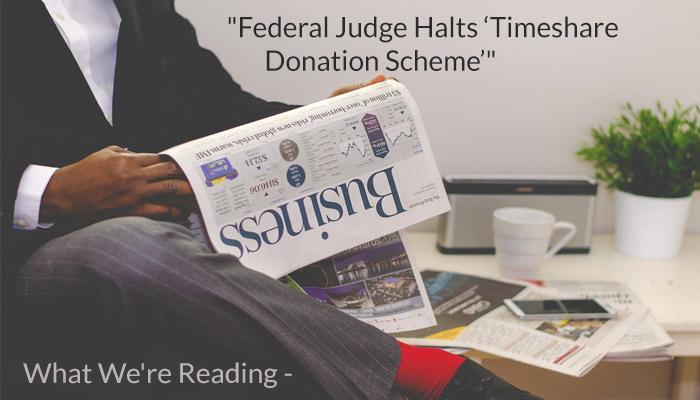 A federal judge in Montana last month put a halt to a timeshare donation scheme that the U.S. Department of Justice calls “abusive.”

The companies in question? Montana-based Project Philanthropy Inc., which does business as Donate for a Cause, and Timeshare Closings Inc., which also does business as Resort Closings Inc., according to the Kansas City Star. According to the federal complaint, these organizations acted in tandem to give appraisals that “grossly overvalu[ed] the donated timeshare rights” that a consumer might claim in the hopes of a generous charitable tax deduction from the IRS.

Just how much did the operators bait-and-switch timeshare owners? According to Gregory Crist of the National Timeshare Owners Association:

As a result of the scheme, thousands of consumers were allegedly provided with improper tax deductions. As the federal complaint explains:

Federal Judge Sam Haddon passed down the order on September 28, 2016; Project Philanthropy and its operators have 30 days to turn over a list of all the names, addresses, phone numbers and social security numbers of the consumers for whom it handled a timeshare donation since 2010.

And that’s not all. The CEO and President of the company have agreed to being permanently barred from the practice of marketing or promoting charitable contribution deductions. The defendants are also prohibited from preparing property appraisals in connection with federal tax returns. Project Philanthropy and all of its affiliated companies must also post a copy of the injunction on their individual websites, and notify all employees of the final order.

Interested in following more consumer protection and consumer watch news? Trying to make sense of the ins and outs of timeshare law in Florida and around the country? Be sure to follow Finn Law Group on Twitter and Facebook for the latest!