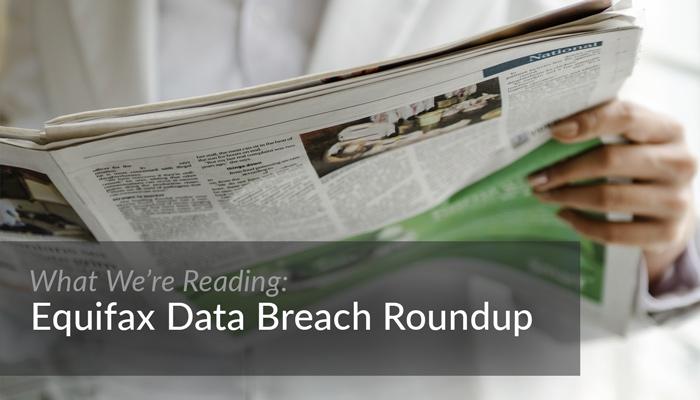 Millions of Americans are still reeling from the massive data breach at Equifax, one of the nation’s largest credit bureaus.

According to Equifax’s notice to consumers, “criminals exploited a U.S. website application vulnerability to gain access to certain files” during the timeframe of “mid-May through July 2017.”

While the company claims that they have found “no evidence of unauthorized access to Equifax’s core consumer or commercial credit reporting databases,” they do warn that other sensitive consumer information may be at risk, including names, Social Security numbers, birth dates, addresses, driver’s license numbers, and even some credit card numbers.

Since the reveal of the hack – more than a month after it was initially discovered – Equifax’s stock has plummeted, and the company has come under fire from some lawmakers in Washington. Equifax and another credit monitoring agency were already under close federal scrutiny, with the CFPB recently fining them $5.5 million in total “for misstating the cost and usefulness of the scores they provide,” according to a report from Reuters.

In light of such an enormous leak and so much uncertainty, many of us are wondering “what’s next?”

For those who are still looking for their plan of action, it would be wise to remember the words of NPR’s Yuki Noguchi, who put it quite bluntly:

“When it comes to dealing with the aftermath of Equifax’s massive data breach, it’ll be up to consumers to be on guard against data thieves…”

Here are a few important resources that can help:

After revealing the existence of the cyber-attack, Equifax set up a portal to help consumers see if their personal information was among the compromised data. Whether or not your information was affected, Equifax is offering complimentary credit monitoring through TrustedID Premier.

This breach puts U.S. consumers at significant risk for identity theft, which occurs when an individual “[uses] your personal information to open accounts, file taxes, or make purchases,” according to the Federal Trade Commission, or FTC.

The good news is that this government agency also has a number of resources available to help consumers, businesses, and consumer protection advocates prevent and recover from identity theft.

There are a few steps that many consumers will want to take right off the bat, including accessing their credit reports and putting a freeze on their credit.

To check your credit:
Did you know that you are entitled to a free credit report every 12 months from Equifax, Experian, and TransUnion, the three major consumer reporting companies? For more information or to request a copy of your reports, visit: https://www.annualcreditreport.com/

To freeze your credit:
Placing a credit freeze – sometimes called a “security freeze” – “lets you restrict access to your credit report, which in turn makes it more difficult for identity thieves to open new accounts in your name,” according to the FTC.

Establishing a credit freeze will not prevent you from getting a credit report. However, in order to allow others – including potential employers, insurers, or landlords – to access your credit, you’ll need to temporarily lift your freeze, which can cost a fee and will require different lead times, depending on the credit agency.

Equifax is currently waiving the fee for setting up a credit freeze; lawmakers, led by Elizabeth Warren of Massachusetts, are also taking steps to pass a bill that “would stop companies like Equifax from charging consumers for freezing and unfreezing access to their credit files” permanently, according to Reuters.

You may also want to consider setting up a fraud alert, which will allow creditors to get a copy of your credit report, provided that they take appropriate steps to verify your identity first; as the FTC cautions, though, fraud alerts “may be effective at stopping someone from opening new credit accounts in your name, but they may not prevent the misuse of your existing accounts.”

To get started with freezing your credit, you’ll want to contact each of the three credit reporting companies:

In addition to these steps, consumer protection experts and officials urge that consumers remain vigilant and take care to closely monitor all bank, credit card and insurance statements for fraudulent transactions or unusual activity.

In all, this is a remarkable story, and its effects – for consumers and their advocates in the government – will be ongoing, and felt for some time. Be sure to keep your eyes open!