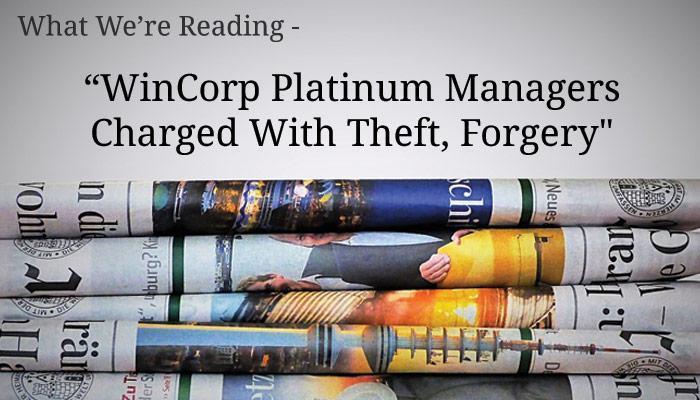 In what is an all-too familiar story for those of us who follow the timeshare industry, two Wisconsin men have been charged with theft and forgery in connection with their management of WinCorp Platinum, Inc., which is based in Portage, Wisconsin.

The men, Jason Klidies, 36, and Neil Davey, 36, were charged with “seven counts of theft by bailee,” with Davey also charged with forgery, according to the Portage Daily Register.

According to court documents cited by the Daily Register, WinCorp Platinum marketed itself as “a solution for timeshare owners wishing to offload their property.”

As the Daily Register explains:

“For a fee WinCorp would transfer title of the timeshare, with the fee going toward taxes, legal fees and maintenance fees, and the clients would be relieved of the legal obligations attached to timeshare ownership and entitled to shares in a WinCorp co-op.”

The trouble began in early 2013, when WinCorp allegedly broke off contact with The Timeshare Company, which handled transfers for the company. Around the same period, the Better Business Bureau reached out to the company, requesting verification of their claim of being “Wisconsin’s No. 1 volume timeshare disposal leader” (the Daily Register notes that the Better Business Bureau has since given WinCorp Platinum an F grade).

But as the Daily Register reports, during the same period:

“…authorities noted apparently non-essential withdrawals from the company account between December 2012 and the end of March 2013, such as $361 on Dec. 16, 2012, for Limos.com, three purchases from an adult video store, three payments to strip clubs in Portage and Wisconsin Dells, $1,162 to Delta.com for tickets to Las Vegas on Feb. 21, followed by $1,000 for child support the next day. The biggest expense over that period was $2,859 on March 30 to a Florida dog breeder.”

In June of 2013, two clients were contacted by their resort company that their timeshare maintenance fees were overdue. When the clients contacted WinCorp, the lines were either disconnected or left unanswered. When the Department of Justice followed up with the clients months later, they found that the transfer still hadn’t happened, nor had the company refunded the client’s money, according to the Daily Register.

They weren’t alone. According to the Daily Register:

“Another client reportedly spoke to Davey in June 2013 and was told that he didn’t have a good reason why the woman’s transfer hadn’t happened and would check it out and get back to her. In August, the woman called back and was informed that everyone at the company was “on vacation.” Further calls went to an out-of-service message.”