When Was Your Timeshare "Wake-Up Call?" 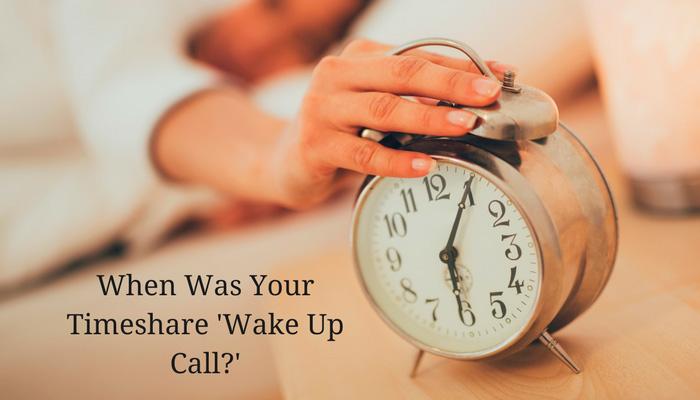 For many people, staying at a resort is the height of luxury – and ordering a complimentary “wake-up call” before hopping in between the sheets is a great way to plan ahead for the next day.

But, looked at a different way, a wake-up call is a little less rosy. It’s an intrusion, an annoyance that kicks you out of your peaceful slumber and into the stresses of a busy day. It’s a call to action, the jarring moment that throws you from one point to the next.

For the sake of this article, we’re thinking of “wake-up call” using that last definition. For timeshare owners, it’s the moment when something clicks that says, in a way, “this isn’t quite right.” It could come at any time – maybe before the expiration of your rescission period, or maybe decades into your relationship with a resort developer.

But, statistics show that this moment does come. Indeed, 25% of timeshare owners might not or definitely would not recommend owning a timeshare, and more than three-quarters of all owners (76%) express feeling some kind of buyer’s remorse over their obligation.

So, if you’ve hit a breaking point in your relationship with your resort developer, when was your “wake-up call?” Was it when you were…

Feeling Overwhelmed By Fees and Assessments?

Part of the appeal of the timeshare product is that it’s a long-term commitment. The promise of a yearly vacation, guaranteed, is an enticing one – certainly, it’s enough to persuade many consumers to sign on the line that is dotted.

But, at the same time, it’s easy to see how a yearly commitment could prove burdensome in time. For many timeshare owners, lifestyle changes over time – such as the loss of a job, the onset of a health problem, or becoming an empty nester – can make it difficult to actually take advantage of that timeshare interest.

And yet the fees and costs persist, whether you continue to take advantage of your home resort or not! It’s important to remember that buying into a timeshare interest necessarily means taking on ongoing, long-term costs, including interest payments, assessments, and annual maintenance fees, which tend to rise year-to-year, regardless of the rate of inflation.

Over time, these fees and other financial responsibilities can pile up, making that timeshare commitment unsustainable for many consumers – a fact that stings even more when many realize that they could purchase a one-off vacation package at a destination of their choosing for less than what they pay in annual fees and assessments alone.

Struggling to Make a Reservation?

Another common consumer complaint involves the timeshare reservation process – and how difficult it can be for timeshare owners to actually, successfully book their time at their resort! In fact, 16% of owners cite issues with booking a specific time or destination as a primary reason for wanting to exit their timeshare obligation.

Our own Michael Finn delves into this matter in pretty significant depth in his article “The Timeshare Resort Reservation System: Totally Off the Reservation?” as well as in a video post.

The long and short of the matter? For many consumers, finding availability with which to book their weeks can be a struggle, since resorts typically claim that bookings are “subject to availability,” based on inventory and other factors. At the same time, many consumers who dig around and attempt to book a unit as a one-time traveler, rather than a shared vacation owner, find that they suddenly can find availability, in the same window of time – and often for less money!

This very matter was at the heart of a recent settlement between New York’s Office of the Attorney General and the owners and operators of a resort called the Manhattan Club. We covered this case in a “What We’re Reading” feature – but here’s some relevant info, courtesy of a press release from the AG’s office:

“Prospective buyers were also told that the club does not rent rooms to the general public, that reservations were easy to make, and that few restrictions apply to reservations by owners.

But these promises were false. For example, contrary to the club’s explicit promises in its offering plan, room availability to owners was greatly limited because rooms were being rented out to the general public. That means that all reservations are subject to availability and owners, in some cases, were unable to use any of the time they purchased.”

For other timeshare owners who actually own little but the “right to use” a certain resort, for a certain period of time, another common frustration has to do with the functionality (and cost) of their points.

For many, the questions are simple: “What do my points actually go to? And why am I paying so much for them?”

The answers, though, are a little bit harder to define. Broadly speaking, in most systems today, timeshare points are set, valued, offered, and exchanged all through the resort developers themselves. This means that resort systems have the power to arbitrarily raise or lower the price and usability of points as they see fit.

For instance, in a previous post, we called attention to one story covered over at news and information resource Inside Timeshare. It involved the Saldana family, which was pressured by their resort to purchase more and more points in order to pay off their hefty maintenance fees. However, once they reached “platinum status” – the point at which they could actually do so – this family found that the monetary value of points dropped to pennies on the dollar when put toward maintenance fees.

For many owners, facing one or more of these issues can be enough to drive them away from the timeshare industry for good – or, at the very least, to attempt to find a way out of their burdensome timeshare interest.

Why that little italicized addendum? Because, you see, at this point, many consumers often find themselves unable to successfully terminate their timeshare contracts – yet another common frustration point for owners.

Indeed, for many timeshare owners, exiting their obligation is a major source of consternation, as they find themselves stymied at every turn.

Many try to recoup their rising costs by renting out their interest, for instance, only to find that the rental market is already oversaturated, and not as lucrative as they would like.

Others attempt to sell their timeshare interest on the secondary market, only to find that this marketplace has been systematically stifled by the major resort developers and their actors. Many timeshares list for just pennies, with the seller even offering to cover any closing costs or transfer fees – and still finding themselves unable to get so much as a nibble from buyers.

Still others may just attempt to simply give their timeshare away or pay to extricate themselves from their obligation– only to find that the internet is rife with dubious timeshare relief and redemption companies, which can realistically offer no guarantee of success. And this is to say nothing of the out-and-out scam artists that circle this industry, looking to prey on consumers desperate for relief.

At this point, some timeshare owners simply throw their hands in the air, defeated. But there are other options! In many cases, direct negotiations with a resort company, aided by a licensed attorney, can prove successful at terminating a consumer’s timeshare contracts. Remember, it is only attorneys who can offer timeshare owners a shield from debt collectors under FDCPA; the option of using “strategic default” as a negotiating tactic with resort developers; and, in applicable situations, the knowledge and ability to utilize litigation effectively.

The bottom line? Though many consumers find themselves feeling trapped, so to speak, by their timeshare commitment, they don’t need to struggle forever. There are options for relief – even if, sometimes, it feels like the light at the end of the tunnel just keeps shifting further and further down the line.