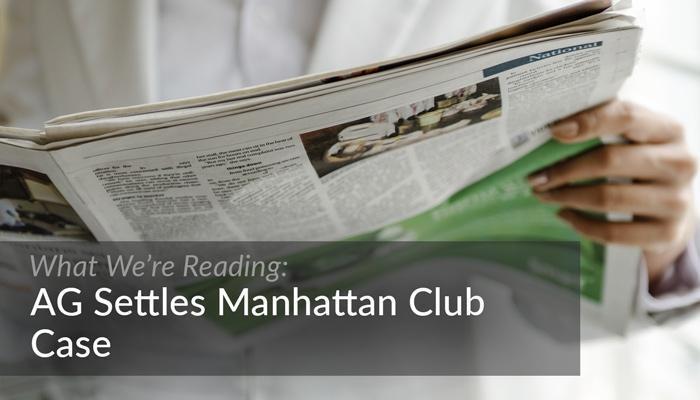 In what can only be described as a huge development for the timeshare industry, New York’s Attorney General has announced a $6.5 million settlement with the owners and operators of the Manhattan Club, a timeshare building in Midtown Manhattan.

Timeshare industry insiders and consumer protection advocates have been following this case for some time now, so to see it come to such a dramatic close is absolutely remarkable.

According to a press release from the office of A.G. Eric Schneiderman, the process began as far back as 2014, when the Office of the Attorney General (OAG) began receiving repeated complaints from shareowners who,

“paid tens of thousands of dollars to become Manhattan Club ‘owners,’ but were unable to make reservations due to a claimed lack of available rooms by the hotel’s operators.”

After a further investigation – including the dispatching of undercover investigators to record the Manhattan Club’s sales presentations and tactics – the OAG uncovered enough evidence to determine that the organization’s sales tactics “amounted to a bait-and-switch scheme.”

As the OAG’s press release explains (emphasis ours):

“Prospective purchasers were baited by a relentless sales pitch that included a number of misleading promises, including that ownership in the Manhattan Club is “better than money in the bank.” Prospective buyers were also told that the club does not rent rooms to the general public, that reservations were easy to make, and that few restrictions apply to reservations by owners.

But these promises were false. For example, contrary to the club’s explicit promises in its offering plan, room availability to owners was greatly limited because rooms were being rented out to the general public. That means that all reservations are subject to availability and owners, in some cases, were unable to use any of the time they purchased. Further, the owners’ annual common charges jumped approximately 200% in the last ten years – to about $2,000 per ownership interest per year for the smaller units – on top of the upfront purchase costs that ranged from just under $10,000 to over $40,000 per ownership interest. Some frustrated owners have sold their ownership interests back for a mere $1, just to escape the burdens of paying these charges.”

As our own Michael Finn has noted before, these tactics are not uncommon in the timeshare industry. For more on the questionable nature of many resort reservation systems, we encourage you to read his piece, “The Timeshare Resorts’ Reservation Systems: Totally Off the Reservation?” And for more on annual fees – which tend to climb dramatically and consistently, regardless of the rate of inflation – we encourage you to read “Who Is This Property Owner’s Association to Whom I Pay My Resort Maintenance Fees?”

In the case of Manhattan Club, its ability to sell and profit off of timeshare interests and foreclose on owners was hamstrung “during the pendency of the investigation” in the summer of 2014 by a Manhattan Supreme Court Justice, pursuant to General Business Law section 354, a provision of New York’s Martin Act.

In addition to the $6.5 million restitution to be paid to eligible timeshare owners – the recent settlement also requires:

The owners and operators to be barred from the timeshare industry

Remove all sponsor-appointed current officers and directors from their positions as members of the Board of the Timeshare Association.

The settlement is the largest in recent history for the Attorney General’s Real Estate Finance Bureau, and is an important victory against the misleading sales tactics and reservation practices that abound across the shared vacation ownership market.

As always, though, it is important to remember that, when it comes to timeshares, the prevailing wisdom will always be caveat emptor, or “buyer beware.” As A.G. Schneiderman put it:

“While timeshares can be legitimate enterprises, scams like this one are common. To avoid becoming a victim, always be wary of high pressure sales tactics.”

To that we might add: Do your research, always come prepared, and don’t hesitate to reach out to consumer protection advocates and agencies for your state if you have any concerns.

For more coverage on the Manhattan Club case, we encourage you to read the stories from the New York Post and the New York Daily News.