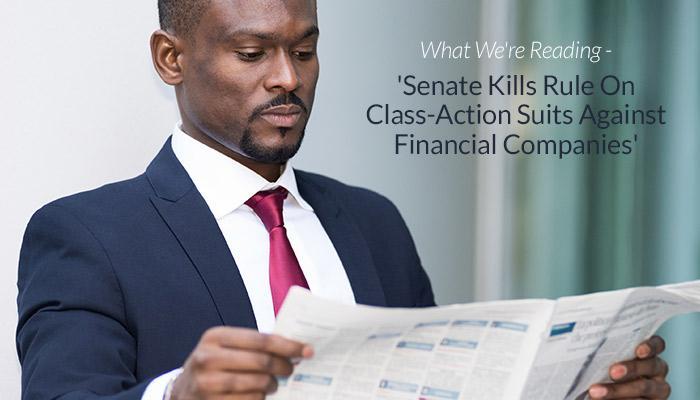 Mandatory (or “forced”) arbitration clauses block consumers from joining together to sue a company for wrongdoing, and they’re quite common among major bank, credit card, and financial companies.

While individual consumers can still sue these institutions, mandatory arbitration clauses – which are often buried within pages of fine print – strike a major blow to consumer power and oversight by making it impossible to pursue class action lawsuits, forcing individuals to “give up or go it alone,” as CFPB Director Richard Cordray once put it.

But in October, the Senate voted – with a tie-breaking vote from Vice President Mike Pence – to roll back that CFPB rule, and to bar similar rules from being put forward in the future. The Republican-controlled House had already voted to rescind the rule, and the measure is currently on the fast track for a signature from the President.

Critics of the Senate’s vote claim that this is a huge blow for consumers and their advocates, with Senator Elizabeth Warren of Massachusetts stating on the Senate floor that:

“This bill is a giant wet kiss to Wall Street… Bank lobbyists are crawling all over this place begging Congress to vote and make it easier for them to cheat their customers.”

CFPB Director Cordray also had harsh words for the Senators who voted for the rollback, claiming in a statement that the bill is:

“…a giant setback for every consumer in this country. Wall Street won and ordinary people lost.”

These sentiments were echoed too by Lauren Saunders, associate director at the National Consumer Law Center, who told NPR that the Senate’s actions mean that “millions of Americans won’t get their day in court.” She continued:

“To me, I’m just really disappointed about the lack of faith in our constitutional system of justice.”

Proponents of the rollback claim that the CFPB’s new rules would have opened up major financial institutions to frivolous lawsuits, benefiting trial lawyers over consumers.

This latest vote is, all things considered, unsurprising; it’s consistent with conservative lawmakers’ continued efforts to dismantle the Dodd-Frank financial reform legislation of 2010, and to defang or altogether eliminate the CFPB, which was created under the Obama administration and is still largely staffed by Obama appointees.

Politics aside, one is forced to wonder who is still looking out for the little guy, the proverbial David facing off with major corporate Goliaths, increasingly emboldened to operate as they please, consequences be damned.

Even as Attorneys General around the country pursue new financial reforms, events like the Equifax breach force one to wonder if these individual actions can be enough to quell the distinctly anti-consumer atmosphere that has taken hold in this country – and which continues to empower businesses in many industries to look out for their own bottom line, at the expense of both fairness and consumer satisfaction.

For more on the recent vote on the CFPB’s forced arbitration measures, we encourage you to read this report from NPR; there is also a great write-up on the legislation from the Washington Post, which you can read here.