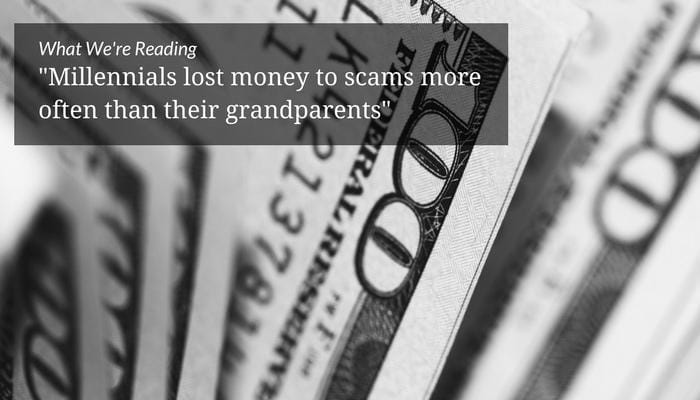 Do you have an image in your head for someone who you believe is most likely to be the victim of a financial scam or fraud? Perhaps you picture someone older, or with less technological savvy than others?

Well, whatever image you do have in mind, it’s high time to update it – and remember that scam artists and fraudsters target all sorts of people, from all different backgrounds and across many different demographic lines.

Case in point? According to information from the Federal Trade Commission (FTC), brought to our attention by CNBC, millennials lost money to scams more often than their grandparents in 2017.

You read that right! According to the FTC’s data, 40% of Americans in their twenties who reported experiencing fraud in 2017 “indicated they lost money to the schemes,” whereas only 18% of consumers 70 or older reported that “they lost money to fraudsters.”

With that said, the FTC’s findings also suggest that older Americans suffered greater median losses than those in their twenties. To wit: Americans aged 80 or over lost $1092 per scam, while the median loss for individuals 20-29 was $400.

According to CNBC, 2017 marked “the first year in which the federal watchdog agency broke out consumer complaint data by age groups.”

In all, the FTC cataloged 2.68 million consumer complaints in 2017 – down from 2.98 million in 2016, according to CNBC. However, the outlook isn’t all rosy. As Tom Pahl, acting director of the FTC’s Bureau of Consumer Protection, noted in a statement, while the FTC received fewer complaints overall in 2017, “consumers reported losing more money to fraud than they did the year before.”

It’s worth noting, too, that the FTC’s report suggests that Americans are continuing to fall victim to the same issues that have plagued consumers year upon year, specifically:

In all, this information is a welcome reminder to all of us to stay vigilant, watch out for the warning signs of scams, and understand how to take action in the event of an incident.

For timeshare consumers, this means learning about the dangers of timeshare resale and redemption scams. For more on this pernicious and all-too-prevalent scam, we encourage you to peruse some of Finn Law Group’s resources on the topic, available here: