What We’re Reading – ‘Sending Out an SOS: The Rise of Travel Security Apps’ 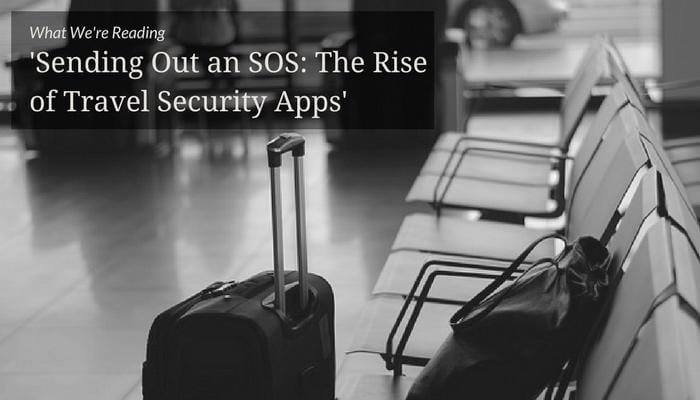 Wouldn’t it be nice if you could be protected from thieves, lost luggage, severe weather conditions, and even travel scams while on the go… and all with just the push of a button?

That seems to be the logic behind a new generation of travel security apps, many of which were recently profiled by the New York Times in an excellent article, written by Elaine Glusac.

Glusac’s story lists a few up-and-coming apps that frequent travelers and casual vacationers may take an interest in, ranging from one (CloseCircle), designed to “act as a security monitor and emergency evacuation service” to another (dubbed Sitata), which, the Times explains, sends out “Trip Alerts” that “cover any potentially travel-disrupting event,” including “disease outbreaks, violent protests, extreme weather or transit strikes.”

It isn’t hard to see the merit of apps such as these, particularly in a time when many timeshare owners frequently find themselves waiting to possibly foot the bill for the damage wrought on their resort by a natural disaster, such as a flood, wildfire, or hurricane.

And with more than half of all Americans saying that they planned to travel to some extent in 2017, and many planning to stay in potentially unreliable rental accommodations or unfamiliar environments, a little peace of mind when on the go could go a long way.

But are these apps the right fit? How necessary are these travel-specific security apps, really? Those are some of the big questions that still await this burgeoning sector, as the Times points out.

As Glusac notes, there is certainly an argument to be made that this technology “may be cashing in on a sense of insecurity,” rather than any actual real threat.

“There are more risks now than in the past, but that doesn’t make travel more dangerous.”

Still, for anyone considering adding a travel security app to their smartphones before they hit the road, the Times list is a great place to start.

You can read the full article, which includes more about other high-tech security options – alongside some practical, real world advice for staying safe when traveling internationally – here.