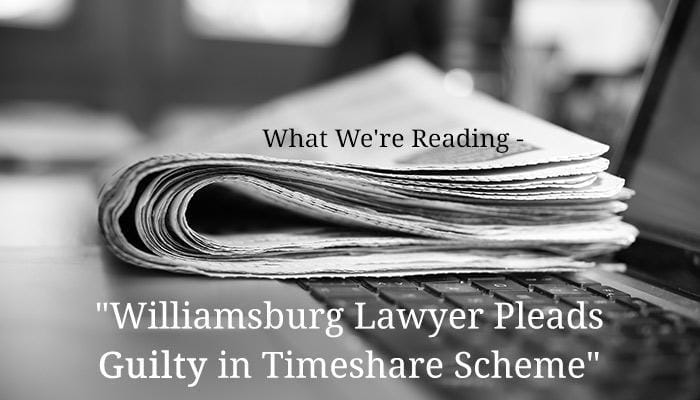 Another week, another example of a duplicitous timeshare scheme – this one particularly fascinating because it highlights the existence of unhealthy shadow markets within the industry itself.

According to court documents cited by the Williamsburg Yorktown Daily, the scheme was this: The perpetrators obtained timeshare units and transferred them into the names of straw owners, or people who keep their identities concealed and have no stake in the actual timeshare property. The conspirators then collected transfer fees from the original timeshare owners, but kept the money for themselves, rather than giving it to the straw owners.

Among the schemers, according to the Daily, was Williamsburg, Virginia lawyer Deborah Wagner, who earlier this month pleaded guilty to conspiracy to commit mail and wire fraud. She could face up to 20 years in prison and a $250,000 fine, the Daily reports, and “may also have to pay restitution” and “forfeit any assets tied to the scheme.”

As the Daily explains:

“Wagner was a partner at Wagner & Hyman, located on Jamestown Road. Prosecutors believe she used the law firm as a front to conduct the scheme from 2011 to 2013.

Other businesses were involved, including Exotic Equity Transfers, LLC and GoodBye Timeshare LLC, according to court documents.”

Other conspirators involved in the scheme have already faced sentencing for their involvement, as the Daily reports: Co-conspirator Brendan Hawkins was “sentenced to three years and 10 months in prison in April 2015 and to pay $546,904 in restitution to 19 resorts he scammed” after being “convicted of conspiracy to commit mail and wire fraud in December 2014.”