Travel Expert Has Timeshare Warning for Tourists in Vegas

What happens in Vegas doesn’t always stay in Vegas. This just happens to include what one popular travel expert and social media writer describes as the “Biggest Hustle in Las Vegas”.  In a video called “Avoid the Bodysnatchers” published this week on Tic Tok,  Jen @Vegasstarfish refers to a group of timeshare tour reps targeting tourists in casinos. Bodysnatchers is a term that has frequently been used to describe certain tour reps who use aggressive tactics when approaching couples visiting the Las Vegas strip. “They’re looking for a specific demographic,” Jen explained…“People who look like they have good credit or enough money to buy into a vacation or timeshare scheme.”

According to Newsweek.com who picked up the story, the timeshare video blog has already recorded some 4.8 million views with 8800 comments in the first three days alone. The video also appears to be a very detailed and narrated observation that quickly illustrates how coordinated the engagement is between tourists that wonder into these areas and offsite personal contact (OPC) stations. The blogger says that there’s often a single employee standing by the door “sizing up” people who walk in. Of the thousands of comments left on the blog, many shared their own similar timeshare sales experiences. 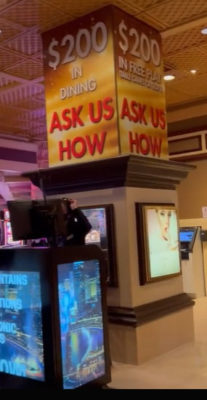 Timeshare developers only pay OPC groups for qualified tours that meet certain criteria, so they work closely as a team and set up in front of high traffic areas to engage as many people as possible. OPC’s are generally independent contractors and reportedly use a number of free offers, gifts and incentives to attract people to their booths or desks. In this example, Jen @Vegasstarfish notes that the desks typically have “provocative signage” such as “$200 in free play ask us how.” Those tour incentives act like a hook for people to take a timeshare tour during their vacation, but sales presentations often take much longer than the promise of an hour and a half. Newsweek reprinted some comments with one individual stating, “They snatched me saying it would only be 90mins! LIES! 4+hours!!!”

After the timeshare video went viral, other social media influencers posted tips on Twitter like @VitalVegas. That post, “Timeshare salesperson repellant” indicated 6 ways to avoid being approached by a timeshare salesperson, keying in on the criteria known to be used by OPC’s. First, tours are almost always couples only and married. You won’t be qualified to take a tour with a buddy or friend. Locals are also not permitted to take timeshare tours, as they consume expensive giveaways. Timeshare presentations can take many hours and sometimes last a full day. Someone who is already packed up and leaving Las Vegas is not a good tour prospect either. There is often an age requirement of 25 or older to tour a resort. Finally, if someone has already gone on a tour while on a current vacation, they won’t be permitted to tour again for the extra gifts.

Some other tour qualifications require a consumer to have a major credit card and a driver’s license. In all, it appears the take away here is to be mindful of where you are and what you are doing while on vacation. Don’t succumb to a high pressure sales presentation or get caught up in something that you might not understand. If you happen to buy a timeshare while on vacation, you should review the contract and documents right away with a professional timeshare attorney to become aware of your rights as a consumer.