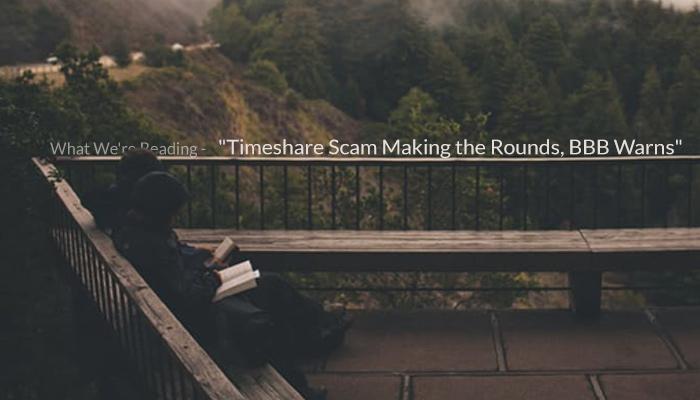 The Better Business Bureau Serving Canton Region & Greater West Virginia has issued a warning to timeshare owners – stay vigilant in the face of a new timeshare scheme, one that may have already bilked one consumer out of more than $22,000.

This news comes to us from Ohio’s Canton Rep, which recently covered the scheme in a staff report. Here’s the scoop, according to the paper:

“BBB has heard from consumers in Pennsylvania, Michigan, New York and Wisconsin stating they were contacted by a representative from Resort Owners Services of 10150 East Pike in Cambridge to purchase their timeshares. The consumers were given paperwork to sign and then asked to wire monies to a bank in Mexico to cover title searches, closing costs, etc. Once the transfers were complete, correspondence ceased or no more information could be received.”

According to the Canton Rep, the BBB has reached out to the statutory agent and legal counsel for Resort Owners Services LLC. He has stated that the company was legitimate, and “was an internal organization that provided services to a family of membership campground resorts.” However, per this source, the company never entered into contracts with the public. More importantly, the organization “ceased operations in 2012 and has not been at the Cambridge address since that time,” the Rep notes.

If nothing else, this ongoing story is yet another reminder for anyone seeking to exit, cancel, rent out, or resell their timeshare to be vigilant – danger is everywhere in the timeshare aftermarket. Before you pay any money upfront, do your research and don’t hesitate to reach out the BBB, FTC, or any consumer protection agencies for your state.

We’ll leave you with the advice that the Canton BBB offers to anyone interested in selling their timeshare: