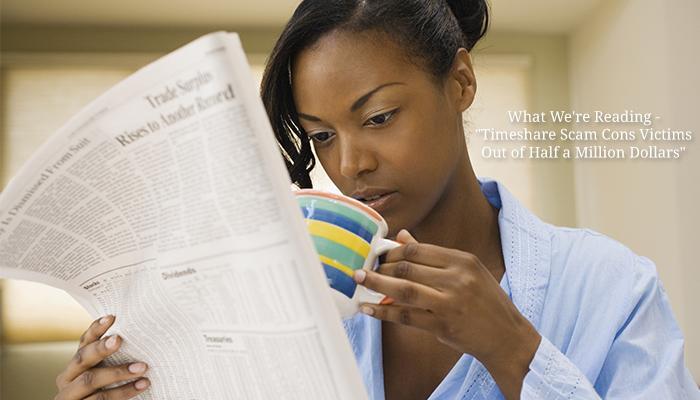 Remember the old adage that if something seems wrong, it probably is?

One Nevada resident found that out the hard way recently – after signing over a thousand dollars to a timeshare resale company that ended up being little more than a front for a scam, according to News 3 Las Vegas.

The victim in question, Joseph Hammet Jr., was initially approached to sell off a Miami timeshare by mail. After deciding to unload one of his timeshare obligations, Hammet reached out to the company, then sent a thousand dollar check “for the fees involved to start the process,” according to News 3.

When he was asked to send even more money, Hammet realized that “he could actually drive the check to the location,” according to News 3. Here’s what he found, in his own words:

Hammet was one of the lucky ones; according to News 3, at least 100 victims have lost more than half a million dollars, collectively, to this scam, which has since ended with two people arrested on federal fraud charges and sentenced to nine years in prison.

The takeaways from this story? When in doubt, never send money upfront to a company that promises to sell or rent out your timeshare, sight unseen, particularly if the company seems overly enthusiastic or pushy about the transaction. In particular, being told to send cash or wire money should be a red flag, as it’s virtually impossible to recover money transacted this way.

“Don’t be pressured into the high-sales sales pitch. Whenever they try to hook you into making a decision on the spot and immediately, you need to take a step back.”

Always do your due diligence before contracting with a company – including meeting face-to-face, if possible. If you have any doubts about the legitimacy of a timeshare resale or redemption company, don’t hesitate to reach out to the consumer protection officials in your area, including the BBB and your state’s attorney general.

For more on this story – including a video – we encourage you to check out the full News 3 report here.

Have any questions or concerns about exiting an unwanted timeshare obligation? Led by Attorney Michael D. Finn with 50 years of experience, the Finn Law Group is a consumer protection firm specializing in timeshare law. Our lawyers understand vacation ownership as well as the many pitfalls of the secondary market of timeshare resales. If you feel you have been victimized by a timeshare company, contact our offices for a free consultation. Know your rights as a consumer and don’t hesitate to drop us a line with any questions or concerns.