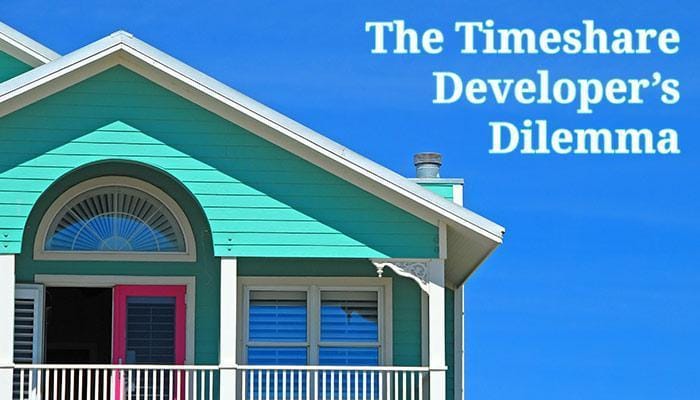 As the marketing segment of the still-booming timeshare industry continues to struggle for legitimacy, one axiom of timeshare sales remains too tempting for its marketers to simply shelve. The lure of owning real estate remains the “siren song” of timeshare marketing, even as the industry continues to distance itself from the notion of actually owning a “piece of the rock” (i.e., an actual, deeded interest to underlying real estate).

The timeshare industry, with its legitimate product – a resort setting with rooms more spacious than a typical hotel room to accommodate vacationing families – is acutely aware that its less than reputable sales and marketing techniques need to be refined and made more consumer friendly. But turning away from existing practices that remain quite effective and profitable is a bit like asking an addict to go cold turkey.

In fairness to the industry, it cannot be said that it has not been making attempts to clean up its aggressive and hardcore sales presentations. The problem is that, from a psychological perspective, the treatment of the timeshare product as a piece-of-the-rock real estate is very compelling to buyers (and therefore to the marketers); this is not the case when compared to the more nebulous “right to use/points-based” alternative to which the industry appears to have essentially transitioned.  As the term “right-to-use” suggests, no real estate ownership (generally referred to as a fee simple interest) is conveyed to the purchaser, so, presumably, in the absence of tangible real estate ownership, the residual value and ultimate re-marketability of a timeshare in an already depressed resale market is severely impaired.

It is easy to understand why the real estate purchase is simply an easier sell.  Even after the lessons learned from the 2007 crash, most of us still have almost an imbued sense that real estate, as an investment, is something that, at a minimum, will maintain its value and, perhaps, even appreciate if we buy wisely.  Indeed, to sell a timeshare at the average price of $20,000 and to merely therewith convey to buyers solely a “right-to-use,” becomes a much more difficult sale, particularly given the multitude of choices readily available to the consuming public on the internet in terms of places to vacation with greater flexibility than timeshare ownership, and without any future legal obligation, as well.

Another obstacle to marketing a “right-to-use” only product is the reality that ongoing annual maintenance fees tend to trend upwards, and are always a part and parcel of timeshare “ownership.”  Imagine, therefore, attempting to persuade a prospective purchaser that they must pay, in addition to the buy-in price, annual maintenance fees in a “right-to-use” only scenario.  We all can appreciate the necessity of spending money to maintain our own real estate or that which we have an ownership stake in, but with a “right-to-use” only product, convincing a purchaser that they also must pay annually to maintain an obligation in which they have no vested legal ownership interest is clearly a much tougher sell.  Based upon this reality, it is little wonder that the timeshare industry is a tad erratic about its marketing tactics.

How, you may wonder, did the industry get itself in this quandary to begin with? Historically, and undoubtedly the way much of the consuming public still thinks of timeshare ownership, a timeshare was typically a resort condominium that was sliced up, not just spatially (your typical condominium annual ownership is of a specific and readily identifiable by legal description unit within a building, plus a proportionate interest in the common area of the property), but also divided up by units of time, as well.  These units of time, generally a week, create 50 or so slices of timeslots that can be sold individually, thus creating a proportionate number of deeded interests within one specific unit of real estate.

In the earlier days of timeshare, say, from its formation in the U.S. in the 1960s, to the end of the last century, the most usual configuration of timeshare unit ownership was thereby always a deeded piece of real estate.  Thereafter, in response to those owners who sought more flexibility in the use of their ownership, exchange companies were set up to act as intermediaries to assist owners who wanted to exchange, on a one time basis, their weekly interest at their home resort for different resort and/or time slot opportunities so they could vacation at other resorts and/or times in order to optimize and increase flexibility in their vacation experience.  RCI and Interval International, two of the original, predominant exchange banks, created point values that were assigned to owners’ interests to quantify the differential values of owners’ interests.  For example, a summer week in Hawaii is clearly of greater value than a winter week in Missouri.  A points-based system was established and put into place by these exchange banks to quantify the differing value of the different resorts’ locations and times of year.  So, perhaps, the summer Hawaii interest received a value of 3,000 points while the winter Missouri resort generated only 800 points.  Of course, a Missouri owner could purchase more points or bank more years to be able to acquire their Hawaiian vacation.

The point system was subsequently adopted by the multi-resort developers beginning in the early 2000s to increase the flexibility of their owners’ vacations.  In theory, the would-be timeshare purchaser would still acquire a home resort interest, but, at the same time have their interest expressed as an allocation of points to be redeemed for use at any time at any of the multi-resort developer’s various resort locations.

It should be noted here, that the ‘home resort’ concept was still retained, arguably to continue to emphasize the fact that the owner still had to pay annual maintenance fees and, therefore, said fees still had to be applied to a specific resort and property interest.  This change marks the beginning of the move away from specific ownership to more of a right-to-use concept, a hybrid, if you will, to provide the owner more flexibility. More importantly to the developer, this hybrid concept provides a continued financial accountability and obligation to the owners via the “home resort” designation essential in upholding the guise of ownership and thereby the ongoing need to “maintain one’s property.”

This brings us to the sales presentation, and also directly to the tip of the horns of the timeshare developer’s dilemma: How to continue to create value for selling its timeshare interests – which have evolved far more into a ‘right to use’ scenario than an actual “piece of the rock” ownership – but, at the same time, how to continue including some semblance of ownership into the equation, so as to continue perpetually burdening the interest owner with ever-increasing annual maintenance fees.

Right-to-use points ownership allows developers to increase sales exponentially, as they are no longer restricted to sell the same timeshare unit only 50 times. The “right-to-use” ownership model further allows the developers to come to grips with the reality that many of these 50 weeks are in undesirable times of the year (depending on the locale) and are, therefore, not as marketable.  Selling points-based ownership provides the developers the ability to sidestep that issue and correspondingly allows them to dilute the desirable resort times among more buyers with little to no accountability to existing interest holders, who can no longer claim an exclusive right to occupy a specific resort unit at their pre-appointed time.  To my mind, this makes the timeshare purchase far less valuable, and further exacerbates the dilemma of the developer as to how to continue to build value, but keep the maintenance burden on its interest holders, who may well see this changeover as a diminishing return on their investment, and perhaps even equate it to a ‘bait-and-switch’ sales tactic.

In summary then, the challenge of the timeshare developer is to find a “kinder and gentler” way to market its products and build in greater perceived value in its product to cushion the burden of continuing to impose the annual maintenance fee obligation on its interest holders.  It is no longer a real estate investment, folks! Is it more or less valuable and/or desirable to you now? How will the developer both end the “piece of the rock” illusion and still profitably promote its products?  Does the current practice of pitching both real estate ownership combined with the greater freedom and flexibility of the points based, right-to-use strike you as the developers’ attempt to eat its cake and have it remain on their plate, as well?

Isn’t that a bit like the classic bait and switch?