At Tax Time, A Final Kiss Goodbye From Your Former Timeshare Developer 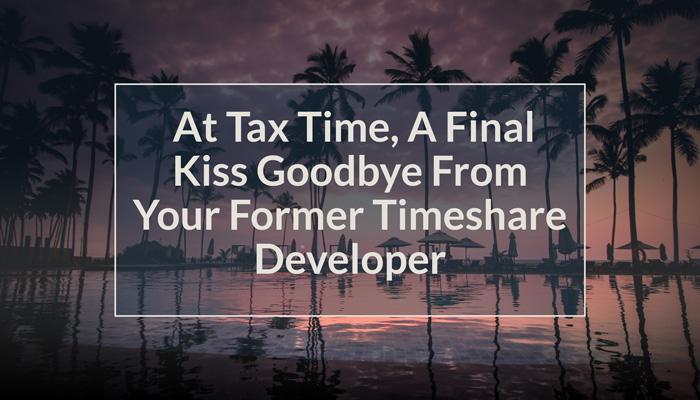 At Tax Time, A Final Kiss Goodbye From Your Former Timeshare Developer

So, it’s early into your new year, and you’re still feeling giddy about last year’s financial ‘win,’ when you and your timeshare developer ‘shook hands’ and agreed to go your separate ways. At last the bleeding has stopped! Your holidays were no doubt a bit brighter because of the extra cash you saved from the negotiated termination of your timeshare obligation.

You grab your mail from the mailbox, expecting some extra holiday charges on your credit card bills, knowing you have a little extra cash to handle it. Suddenly you spot the unexpected envelope from your former resort and tear it open. Nope, it’s not a belatedly sent holiday card, it’s an IRS form 1099, (either an “A” or a “C”), and it is advising you that this form must be filed with your tax return because the resort has already sent the IRS a copy.

But what exactly does this mean? There’s an amount listed on the form, and it is a significant number. It seems that via this document, your former resort is advising the IRS that this is the amount of the debt of which they have so generously forgiven you. You, per this 1099 form, apparently previously owed this amount to your timeshare resort, which if you had continued to pay per your former contract obligation, would have been paid out to them over the remaining term of the promissory note, over whatever the timeframe that you had remaining on your timeshare mortgage. But why is this now the IRS’s business?

This unpleasant and unanticipated little form now symbolizes, to you and the other owners who fought for, and ultimately won, a timeshare contract cancellation, the insult following the injury! Except this insult brings with it its own new potential fiscal crisis.

The 1099 form is referencing this large amount you are now seeing for the very first time, which may very well be taxable income! Unlike the mortgage balance forgiven, which would have been spread out over the life of the loan, this possibly taxable sum has now been reported to the IRS all at once, in one lump sum! So, say the amount reported is about $25,000.00, an average amount depending, of course, on your individual circumstances. Say further that your tax bracket is 20%, a rate on the lower end of the scale. Your new added tax bill is $5,000, and it’s all due by April 15th! Suddenly your resort goodbye kiss feels a lot more like a cheap punch in the mouth.

So, does this tax form receipt mean that the recipient is stuck with the tax bill for the so-called income supposedly generated from the negotiated cancellation of the timeshare contract? Well, possibly. Like many complex issues, the correct answer in your instance may require some significant sleuthing.

The purpose of this article is to give you some food for thought and to encourage you to consult with a tax professional before you assume that your receipt of a 1099 form from a timeshare developer automatically means you’re staring down significant tax liability.

Before sharing these thoughts, though, please do understand we are not providing tax advice, merely a possible position that we believe is quite tenable and may be worth exploring with your own tax advisor. I’m compelled, however, to further clarify to you the reader, the significant limitations of my thoughts on this subject. Although it’s accurate for me to state that I was a Certified Public Accountant, it is much more important to note that my C.P.A. licensure has long ago lapsed (because I didn’t choose to keep up with the annual professional education courses necessary to retain my certification). My so called technical knowledge is thereby quite dated, and therefore cannot be relied upon for an issue as significant as this. My current expertise is as a lawyer, and currently lies with the multitude of tasks involved in extricating my clients from their lengthy timeshare contracts, not preparing their tax returns. Please take your tax preparation advice solely from your own qualified tax return preparer. If you don’t currently use a tax professional for preparation of your tax return, this may be a good time to reconsider that position.

Having now gone to some length to make sure you’re aware of my limitations, I will go on to state my own personal conclusions on this issue, and my reasoning in arriving at these conclusions – and do hereby invite you to share my thoughts with your own expert tax preparer. Again, I’m doing so with the admonition that I’m advancing a theory only, and that every tax filer is unique, with differing facts and circumstances, and that I am not offering, nor should you interpret my comments, as tax advice.

Historically, over the past half dozen years or so, hundreds and hundreds of Finn Law Group clients have received IRS 1099 forms, both 1099A’s and 1099C’s (along with other assorted IRS forms). As you may expect, the receipt of these forms creates confusion and disruption, particularly for individuals who were planning to file their tax returns quickly, in anticipation of receiving fast refunds with a minimum of anticipated complications.

Should you find yourself in this scenario, I point you, dear reader, to IRS form #982. This is the form that the IRS advises should be filed along with the income tax return itself as a form of supporting schedule, which provides notification to the IRS that the amount presented to them via a 1099 is being acknowledged, but further that the amount listed should be excluded from the taxpayer’s gross income. The myriad of possible reasons provided on the 982 Form are in and of themselves confusing and difficult to understand. I’m therefore providing my readers what I suggest may be appropriate reasoning in concluding that, in many cases, there should be no “income tax penalty” imposed after successfully negotiating a release of contract with your timeshare resort.

Allow me to herein provide my argument as to why some forms of debt forgiveness may well be construed as taxable income, and then differentiate the negotiated act of cancelling a timeshare contract and why this transaction therefore logically should be treated differently.

Since “income” generally means a measure of accretion of wealth or value added to your worth, then the cancellation of a debt, when that debt was incurred when you received something of value, should be counted as income because the elimination of the debt liability plus the retention of the item acquired when the debt was incurred increases your net worth. Under this definition of added wealth, the taxing of same would be quite logical.

Applying this argument to the cancellation of a timeshare contractual obligation and its related underlying indebtedness, it’s immediately evident that the cancelled owner has retained absolutely nothing of value. They’ve surrendered their interest in exchange for a debt and/or contract cancellation, but after the transaction they have absolutely no accretion of net worth. Indeed, they’ve lost anything previously paid on an ‘asset’ they no longer own, so any argument that they’ve achieved and retained income or anything of value because of the contract cancellation is obviously simply not accurate.

To further muddy the waters, in terms of taxpayer reporting requirements, the issue becomes way murkier when you apply it to timeshare transactions. Whether or not the industry will ever acknowledge that the resale value of a timeshare interest is minimal at best, what we can establish is that it would be extremely unusual for anyone other than the resort developer to acquire the timeshare interest at foreclosure, and therefore the liquidated basis of the interest will nearly always be zero, or at best a nominal value at foreclosure. Also making the timeshare transaction more complex in terms of following the instructions of either IRS form 982 and/or publication 4681 relating to this issue is determining whether the underlying debt should be viewed as “recourse” or “non-recourse,” given the propensity of the developers to utilize non-recourse based non-judicial foreclosures to recover the interest the greatest majority of the time.

In conclusion (and despite all of the language to the contrary), I’ve intentionally attempted to avoid in this writing becoming overly technical in terms of specifically advising of taxpayer reporting requirements other than to suggest very generally that the filing of the IRS form 982 will most probably be required. Lastly again, I do most strongly recommend utilizing a professional tax return preparer, as these forms are not at all intuitive.

Readers, I invite you to have your tax preparers email me at the email address provided below, if they so choose. However, I’ve done my best to include all my thoughts on this complicated subject within this article, so I’ll have little to offer beyond this, I’m afraid.

I earnestly wish that I could offer something stronger, less complex, and more persuasive to help provide absolute answers to this prominent issue, but I do feel that this issue is important enough, and the financial ramifications potentially high enough, to bring it to your attention.