What We're Reading – "Save the CFPB, Mr. President-elect" 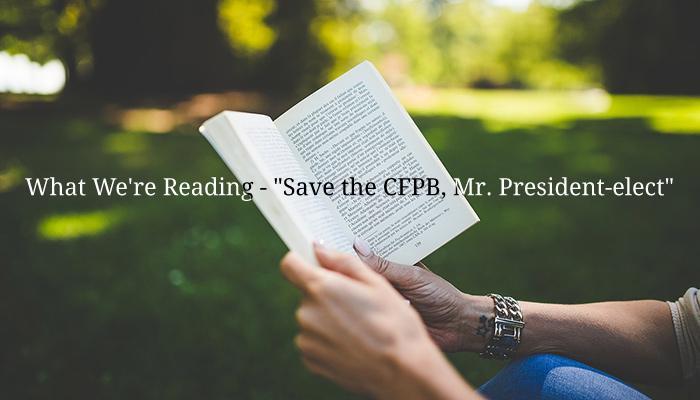 For consumers facing off against mammoth, faceless companies, it’s easy to feel like a little “David” meekly shuffling up to an unapproachable “Goliath.”

And, throughout American history, large companies and corporations have realized their incomparable power and behaved accordingly – as if they had impunity to treat consumers however they’d like, all but free from the threat of legal repercussions.

One important check was introduced a few years ago, when the Consumer Financial Protection Bureau (CFPB) came into being following the passage of the Dodd-Frank Wall Street Reform and Consumer Protection Act. Since its inception, the CFPB has lobbied hard on behalf of consumers against deceptive and predatory financial practices.

As Liz Weston writes in an editorial for NerdWallet, also published on CBS News, the CFPB’s “sole priority is to make sure the average person gets a fair deal.” To that end, the CFPB has accomplished a great deal in a fairly short period. In particular, we’ve followed the CFPB’s work to rein in aggressive debt collection practices with great interest; in columns like this one, we’ve discussed the far-reaching implications of its fight against “forced arbitration” rules in the financial industry, which severely limit consumers’ ability to pursue class action litigation.

Flash forward to 2016, and the CFPB is under grave threat, not just from critics, but from the president-elect himself, who has vowed to dismantle Dodd-Frank and the CFPB.

As Ms. Weston’s well-written editorial makes clear, empowering all people – not just moneyed interests – is vital for the health of the economy; the CFPB, while ultimately as fallible as any public institution, is a vital agent working on behalf of the common man.

Ms. Weston sums it up succinctly when she writes that companies don’t “have a right to make a profit” by any means necessary. Instead, she writes:

“Under our system, companies have the right to TRY TO make a profit. That’s a huge difference, since no one has a right to profits that aren’t earned honestly.

And that’s why the CFPB exists: because many financial service companies don’t understand that distinction, and will go to any lengths to make a buck. Without an enforcer to make sure they adhere to the rules that make marketplaces transparent and fair, these companies will run roughshod over consumers.”

As attorneys concentrating in the field of consumer protection, we recognize how important it is to have avenues in place for consumers seeking relief or channels for dispute. Whether it’s the BBB, the FTC, or the CFPB, it’s essential for consumers to know they have a strong voice advocating for and effectively addressing their needs. We’ll give Ms. Weston the last word:

“…the agency itself needs a strong defender, one who understands that truly healthy, competitive financial marketplace can’t exist without sensible regulation and enforcement.”

Who will be the CFPB’s advocate in the coming administration? It remains to be seen. But the economic health and stability of many businesses, industries, and American families may depend on having one.