The Story of 97 Million Robocalls… With a Connection to Timeshares? 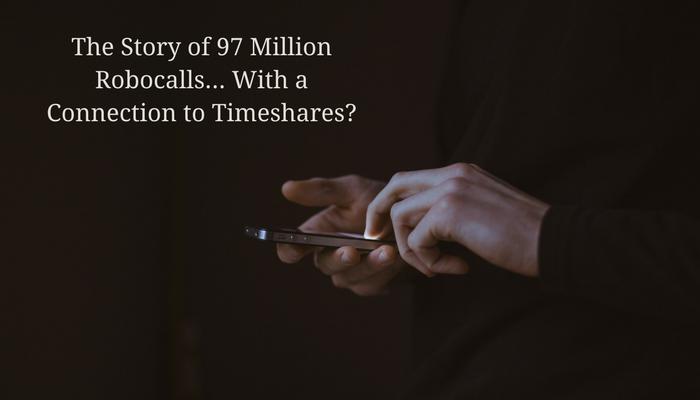 A Florida man is facing one of the largest FCC fines in history, for his part in a scheme that may have resulted in nearly 100 million robocalls in 2016 alone.

Let’s explore this developing story – which may be particularly relevant for anyone interested in the travel, vacation, and timeshare industries.

The Story of 97 Million Robocalls

According to multiple reports, the suspect, Adrian Abramovich of Miami, is facing a $120 million fine for what officials have called “one of the largest—and most dangerous—illegal robocalling campaigns” ever uncovered in the US.

The FCC filed its complaint in June of last year, alleging that Abramovich, who also operated under the name “Marketing Strategy Leaders,” violated the Truth in Caller ID Act. (We covered this complaint at the time, in a “What We’re Reading” post available here.)

How the robocalls happen – Neighbor Spoofing

Abramovich has been accused of using a technique known as “neighbor spoofing,” which causes automated phone calls to appear as if they are coming from local numbers. Officials allege that the suspect was responsible for an average of one million calls per day at one point in 2016, according to Newsweek.

According to Newsweek, FCC Chairman Ajit Pai has also noted that this robocall effort was “particularly abhorrent” because it “substantially disrupted the operations of an emergency medical paging provider” at one point, which “could have delayed vital medical care, making the difference between a patient’s life and death.”

This would be an enormous and important story under normal circumstances – but it’s particularly relevant to anyone with an interest in the travel and shared vacation ownership industries, as well as the scams that tend to affect consumers in these areas.

Why? To answer that question fully, it’s important to consider the substance of these alleged robocalls.

What happens during the robocall

As Minda Zetlin explains over at Inc.:

“The calls begin with a pre-recorded message pretending to be from Marriott, Expedia, or TripAdvisor. They offer an exclusive vacation deal you can learn about if you press 1. But if you do press 1, your call is routed to a call center in Mexico operated by one of several travel companies there that will try to sell you vacation packages or timeshares. Needless to say, none of this has anything to do with Marriott, Expedia, or TripAdvisor.”

In fact, it was TripAdvisor who initially began looking into these robocalls, according to an FCC filing. The brand had become aware that its branding and name were being used without authorization, prompting it to pursue an independent investigation, and eventually connect with the FCC’s Enforcement Bureau.

During the course of its investigation, Zetlin notes (citing the FTC):

In a recent testimony submitted to the Senate Commerce Committee, Abramovich “denied fraudulent activities,” according to a report from Bloomberg. He has also claimed that resorts associated with his telemarketing “were indeed real resorts, offering real vacation packages.”

This testimony contrasts slightly with a statement from FCC commissioner Mignon L. Clyburn, who claims that the spoofing efforts “had a direct and adverse financial impact on consumers.”

Similarly, per Newsweek, Chairman Pai has “alleged that Abramovich typically victimized the elderly and that some consumers had been scammed out of thousands of dollars.”

As of the time of this writing, not much more seems to be known about the foreign call centers associated with the robocall scheme, nor about the legitimacy (or lack thereof) of their vacation products.

For his part, Abramovich has testified that he was not the “kingpin” of this activity, according to Bloomberg. He has also asked for a reduced fine, claiming that the effects of the calls have been overstated, since, as Gizmodo puts it, “96 percent of the calls were ‘less than one minute’ and less than two percent of people ‘had any meaningful interaction’ with the calls.”

The Takeaway for Consumers?

While this story is still unfolding, it is a worthy reminder to all consumers to take steps to safeguard themselves from the risk of scams and fraud carried out by phone.

In particular, we have seen timeshare owners get targeted by scammers time and time again, using various methods for making contact.

In many cases, this scam takes the form of an apparent timeshare “resale” or “redemption” company reaching out to consumers, claiming that they already have interested parties ready to take over the owner’s timeshare interest – provided that the consumer pays up, typically using an irreversible payment method, such as wire transfer. Once the consumer pays up, this company tends to cease communications – or disappear entirely.

For more information on the threat of common timeshare scams, we encourage you to peruse some of the following resources from the Finn Law Group team:

For more on how to remain vigilant for the threat of scams in general – and some critical guidance on how to report suspicious activity, should you be targeted – you may wish to explore some of the information available from the following resources: