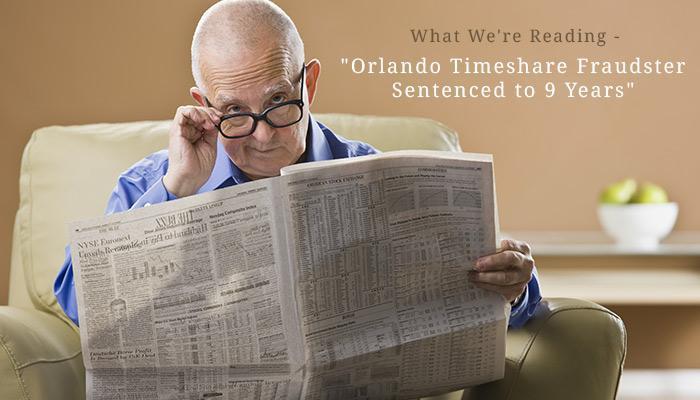 Timeshare consumers eager to cancel or resell their contracts are a prime target for scammers; we’ve seen this egregious timeshare sales scam crop up again and again in our home base of Florida and in timeshare markets around the country.

It’s a heartbreaking thing to see for timeshare owners and consumer protection advocates who follow the industry – but today, some Florida residents have reason to cheer, as an Orlando man who “swindled buyers out of more than $700,000” has been sentenced to nine years in federal prison, according to Orlando’s WFTV9.

The man, Eugene Warren Brewington, 34, of Orlando, ran and operated two Orlando companies that “would make unsolicited calls to timeshare owners all over the country saying they had found a buyer for their timeshare.”

“The owners were told that buyers had deposited money into an escrow account for the purchase of their timeshares and then received legitimate-looking sales contracts from Brewington’s companies, a U.S. Department of Justice release said.

The timeshare owners were told to send advance fees to the companies to finalize the sales.”

We encourage you to read more about the case over at WFTV or via the Orlando Sentinel.

It’s important for consumers to educate themselves on the ins and outs of the timeshare industry, lest they fall victim to a similar scam. We encourage you to read more about navigating the vacation industry with this handy guide from the FTC, and stay alert for any “red flags” that may signal that a resale or redemption offer is less than legitimate.