What We’re Reading – "Ohio Woman Warns of Timeshare Resale Scam That Cost Her $35,000" 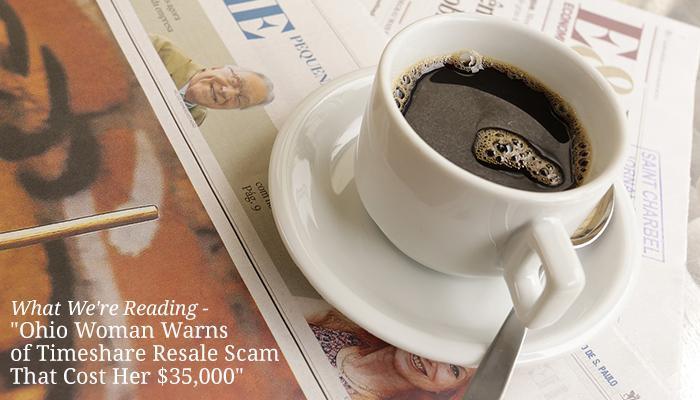 Timeshare resale, rental, and redemption scams are pernicious and far too prevalent, duping countless consumers out of thousands of dollars every single year. That doesn’t make it any less heartbreaking to hear a story like the one that came our way recently, courtesy of a news report by Cleveland’s ABC News 5.

According to the report filed by Derick Waller, a woman from Ohio’s Sheffield Village is claiming that she has lost $35,000 as the result of a timeshare scam that started all the way back in 2015.

The woman in question, Lisa Kubalik, claims that a company made an offer to purchase her Cabo San Lucas timeshare two years ago. Kubalik was particularly eager to get out from under her timeshare obligation because her late husband was, at that time, battling dementia and unable to travel.

Kubalik even informed the resale company, which claimed to be based in Colorado, of her husband’s plight, according to News 5. As she tells Waller, this suggests that the apparent scammers willfully “took advantage of her during some of her most vulnerable moments.”

Judging by News 5’s report, Kubalik fell victim to the classic stages of a timeshare resale scam: She was contacted out of the blue and encouraged to pay taxes and fees upfront in order to receive her proceeds from the sale.

In this case, Kubalik says she “wired thousands to Costa Rica,” according to News 5; and yet, despite sending the money, the company that reached out “stopped answering the phone” and Lisa “still owns the property” two years later.

Timeshare consumers looking to sell or rent out their timeshare would do well to follow the advice of Sue McConnell, of Cleveland’s BBB, who offered the following words of wisdom to News 5:

“You really need to do your research… It is usually a red flag if a company solicits you and is using high pressure sales tactics, or making wonderful promises on how they are going to help you unload their time share.”

The BBB also recommends “never offering up front cash and especially not to bank accounts located outside the country.”

For more on this story, including a video, we encourage you to read the rest of the report here.

Have any questions or concerns about the many dangers of the timeshare aftermarket? Looking for an avenue of dispute for your challenging timeshare situation?