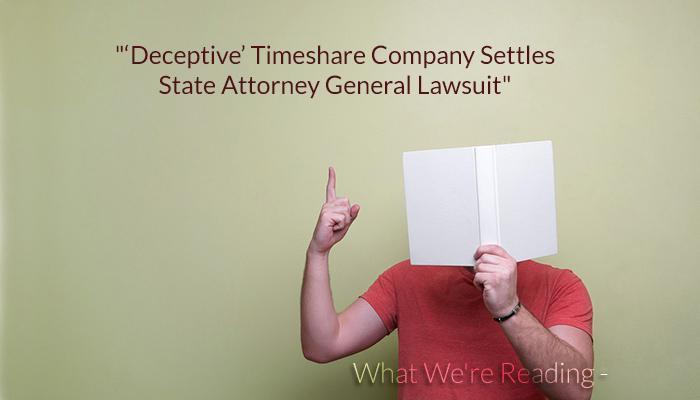 A Colorado-based timeshare sales company recently settled a lawsuit filed by the state for $325,000, according to reports from the Vail Daily and BusinessDen.

Colorado Attorney General Cynthia Coffman brought the suit against Highlands Resorts at Christie Lodge and its head, Edward “Todd” Herrick, along with another salesperson and vendors, for employing tactics that the state says “intentionally deceived, misled and financially injured consumers.”

What sorts of tactics? Amy DiPierro at BusinessDen paints a stark picture:

But after enduring a 90-minute pitch, the state alleges, customers received certificates for their “free” airline tickets and cruises – which included deposits as high as $200 and only applied to trips at predetermined times and in predetermined places.

Highlands Resorts told customers the travel packages were worth $1,900, but each certificate only cost the timeshare business $40 to buy, the complaint claims.

In addition to luring consumers in with flimsy promises, the company also used deceptive sales practices, according to the Attorney General’s complaint. According to documents, Highlands Resorts would claim that the price of a timeshare would jump up to $25,000 unless customers took advantage of a same-day discount offered during the sales presentation. The state, however, alleged that said “discount” never expired, and most consumers paid just a fraction of that supposed $25,000 value.

“Highlands Resorts feared that if a consumer left the sales presentation without making a purchase, they would never return,” the state wrote in its complaint.

And it doesn’t stop there. As BusinessDen reports, the company “also contacted Colorado residents on the state’s no-call list.” Highlands Resorts was also “not a registered telemarketer in Colorado for most of the time that it marketed Christie Lodge properties,” according to the state; while it eventually registered itself after being notified by the state Attorney General, “its vendors did not,” DiPierro writes.