What We’re Reading – "Brexit: How Would It Affect the Timeshare Consumer?" 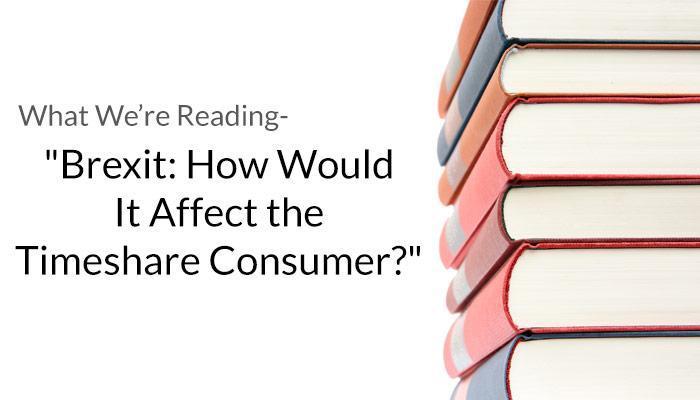 We tend to think of timeshares in terms of how they impact consumers in the United States, particularly in our home base of Florida. But the timeshare is a worldwide phenomenon, as evidenced by a fascinating recent blog post from Worldwide Timeshare Hypermarket, which bills itself as “Europe’s leading timeshare resale company.”

The piece – “Brexit – How Would It Affect the Timeshare Consumer?” – is an interesting look at what Britain leaving the European Union (an issue that is coming to a vote this summer) could mean for British timeshare owners and travelers in general.

The effects of the split could have a lot of unexpected implications on timeshares UK citizens pay for in other EU countries. In a subsection on the “EU Timeshare Directive,” the post’s author writes:

In short? If the UK should leave the EU, it might put consumer protection at risk unless certain exemptions could be created. Comparatively, here in the United States we have 50 different sets of laws that are not necessarily uniform like the EU regulations.

The post details a number of other interesting impacts from a “Brexit,” including what currency fluctuations may mean for timeshare owners’ “annual management fees.”