What is the FDCPA? What Does It Mean For Consumers? 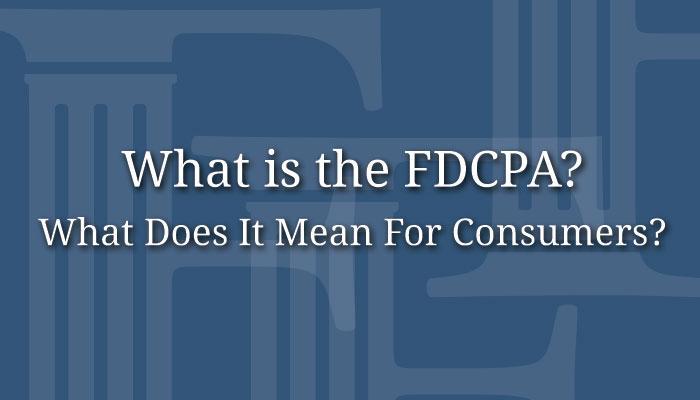 Signed into being in 1978, the Federal Fair Debt Collections Practices Act (FDCPA) is an extremely important piece of consumer protection legislation, the influence of which is felt across numerous sectors, including in our field of expertise, the vacation, travel, and timeshare industries.

Here’s a quick users’ guide to FDCPA – what it is, and what, exactly, it can do for consumers.

Primarily enforced by the FTC, FDCPA is a two-pronged piece of legislation. On the one hand, it is consumer-oriented, designed to, as the Federal Reserve’s Consumer Compliance Handbook puts it, “eliminate abusive, deceptive, and unfair debt collection practices” and promote consistent state action to “protect consumers from abuses in debt collection.” On the other side of the coin, FDCPA acts as a safeguard that “protects reputable debt collectors from unfair competition,” encouraging ethical, reasonable debt collection action.

Who Does FDCPA Apply To?

FDCPA, first and foremost, only applies to debts incurred by a consumer for personal, family, or household reasons; it is not designed to apply to corporate, business, or agricultural debt.

It is also important to bear in mind that FDCPA defines a “debt collector” as “any person who uses any instrumentality of interstate commerce or the mails in any business the principal purpose of which is the collection of any debts, or who regularly collects or attempts to collect, directly or indirectly, debts owed or due or asserted to be owed or due another.” This definition also includes “any creditor who, in the process of collecting his own debts, uses any name other than his own which would indicate that a third person is collecting or attempting to collect such debts.”

In (slightly) plainer English? FDCPA applies to individuals or third-party agencies who regularly collect debt on another party’s behalf, or to a person or institution that uses some name other than its own in order to collect its own consumer debts.

With that in mind, there are many types of debt and debt collectors not covered under FDCPA, including (but certainly not limited to) any organization that collects debts under its own name (such as a resort company reaching out directly to a timeshare owner) or by means of a debt collector that collects debts regularly for an institution “to which it is related by common ownership or corporate control.”

What Does FDCPA Do For Consumers?

FDCPA provides multiple safeguards to consumers, including provisions prohibiting debt collectors from making any false, deceptive or misleading representations, or threatening to take legal action if that course of conduct is not intended.

Further, debt collectors may not engage in conduct intended to disgrace or harass the alleged debtor/consumer, which includes stipulations against threats of violence against a consumer’s reputation, physical person, or property; the use of obscene or profane language; or repeatedly or continuously calling with the “intent to annoy, abuse, or harass any person at the called number.”

In addition to these prohibited practices, FDCPA also places limits on how debt collectors may contact consumers: A debt collector, for instance, is expressly prohibited from sending a post card, which illegally “reveals the existence of a debt to anyone who sees it.” Similarly, debt collectors are expected to not make contact “at any unusual time or place or a time or place known or which should be known to be inconvenient to the consumer” (broadly defined as before 8 a.m. or after 9 p.m., local time).

There are many more facets and restrictions to FDCPA than we could reasonably cover here, and we encourage you to peruse the full text at the FTC’s website, here.