The Dark, But Very Lucrative, Timeshare Developer Revenue Stream: Are Its Days Numbered? 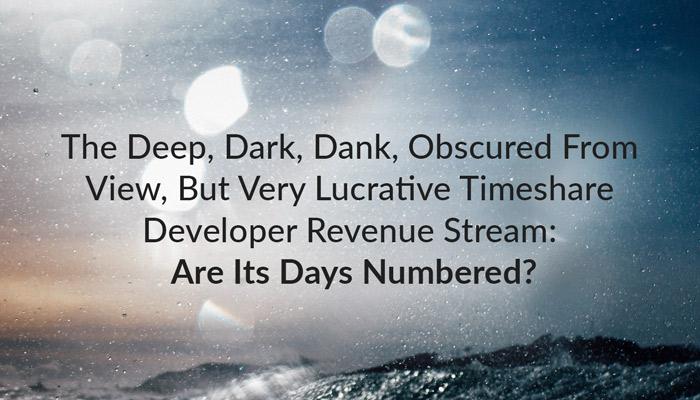 As consumers with a certain level of understanding of business, we probably attribute the lion’s share of timeshare resort revenue to two central factors: timeshare sales and timeshare rentals. As it turns out, there is a third major revenue stream that’s related to sales, but is an entirely separate source of revenue, and it’s a significant one.

Depending on the nature of the initial purchase – that is, whether it was a deeded interest, or, more commonly over the past fifteen years or so, a “right to use” amalgamation of points – this shrouded revenue source may indeed also be in violation of certain state consumer rights statutes, including the Uniform Commercial Code.[1]

I’m speaking to the universal resort practice of retaining every dollar received from a defaulting purchaser, even if the entire purchase price, or an amount close to the total, was paid over to the resort prior to the owner’s default, which we may think of as a cessation of paying the resort either against the purchase price, or subsequently the annual maintenance fees or additional capital assessments owed. It’s not considered relevant, at least if one believes the purchase contract, to factor in the sometimes quite-significant amount paid in up to the moment of default, in terms of any form of accounting back to the defaulting purchaser any sum of money paid. It’s all retained by the resort, pursuant to the purchase contract, as “liquidated damages.”[2]

In other words, an unwitting purchaser could have paid in, say, $18,000 of his or her $20,000 purchase price (not to mention the additional payments of interest and annual maintenance fees), defaulted for any number of reasons (from an income loss or simply growing dissatisfaction with the purchase), and then still be pursued by the resort as a debtor for the unpaid balance!

“Well, isn’t that appropriate?” you may retort; after all, the purchaser has defaulted on a perfectly legal (on its face) promissory note obligation of $20,000 when only $18,000 has been paid? Well maybe, but let’s examine what happens next. Is the developer out the missing $2,000?  Ask what happened to the object of the $20,000 purchase? Well look at that, the actual property never, even for a moment, left the possession of the developer! My goodness, the developer just re-sold the interest to another brand-new buyer for a fresh $20,000!

So now are you still comfortable with the original purchaser being pursued for the missing $2,000? Comfortable with them perhaps being sued, almost definitely facing derogatory credit reporting, and likely suffering harassment from bill collectors?

So what exactly happened to the first purchaser’s $18,000 paid to the resort? Is any of it accounted for, with maybe a portion returned to the guy who ended up with nothing (except perhaps a lawsuit)? Not a chance in Hades!

The so-called ‘extra revenue stream’ is now actually an extension of the existing stream to the developer from sales, and sales, and maybe still more sales. How many times can the same unit interest (or bloc of points) be resold over the life of the project? The distinction (and thus a portion of the reason for my overly dramatic title) is that typically sales revenue in, say, a condominium project is recorded once, and the revenue is, of course, offset by the cost of acquisition of land, construction costs, marketing costs, etc; the net amount remaining after those costs is the developer’s profit. However, in the case of the timeshare developer, the original buyer covered those costs in their initial transaction! Therefore, the new additional piggy-back to back to back transactions didn’t come with any more land acquisition or construction costs, and therefore essentially came only with very little new or fresh costs of sale beyond the re-marketing costs.

“Well wait,” you might say, “this can’t be right! You’re sure this practice is universal? Yes? Well then, are you sure this unconscionable practice is even legal?” Good question – and one wherein the answer to that question may be evolving.

And it’s not necessarily the laws in place that are changing! Instead, it is the timeshare product changeover – the newer form of the property that is being marketed by the developer – that is creating a change, in which existing laws are now perhaps becoming relevant to the timeshare purchase, and by doing so may be enforced by the previously out-of-luck defaulting purchaser. In fact, it may well be that the same old existing law pendulum may be swinging back in favor of the consumer!

I reference the fact that over the past decade, plus a few years, there has been a change in the product that the timeshare industry is selling. Since the turn of the century, the industry has backed off of the selling of the deeded weekly timeshare product, which was indisputably a real estate product, in favor of a product they tout as being more user flexible, called a “right to use” product.

Setting aside the differences in the actual ability to use the two very different types of timeshare “ownership,” the focus of this article is on the migration of the timeshare product away from a real estate based product and toward what we attorneys refer to as “personalty”. In our lawyer’s world, everything not legally defined as real estate is personalty (the only other option in the law). Presumably, a “right to use” timeshare product (i.e., points based) is not considered by the law as real estate, if it no longer possesses any attributes of real estate; therefore, it is considered as “personalty,” and is subject to differing state laws, particularly including the universally adopted, in some form in every state, Uniform Commercial Code.[3]

Additionally, the laws regulating real estate within state boundaries do vary from state to state. Personalty, however, is a commodity of a different color. The Uniform Commercial Code (UCC), as its title suggests, is nearly uniform in its textual content, and from an applicability standpoint, every state in the Union has adopted, with minimum exceptions not applicable to this article, a version of the UCC almost identical with its neighboring states.[4] In other words, as we discuss the law of personality (again, all that is not deemed real estate) we can speak to it across the board. These laws apply everywhere within the USA.

You may have seen other articles wherein I, as a Florida lawyer, either cite specific Florida statutes or issue a cautionary statement that the principles I was espousing may not apply in other jurisdictions. Contrast this article, where I do not constrain my statements. Also, rather than cite state specific portions of the UCC, I, in places, simply refer to Articles within the UCC, and in others the “pure code provision.”

Further, this article is not intended for an audience of lawyers or jurists. It’s intended for consumers, so that they may get a grasp of a relatively new set of laws, including the Uniform Commercial Code, which now may begin to play a much greater role in governing timeshare projects and, correspondingly, the developers who operate these projects. Consumer rights may also get a major boost by the applicability of the UCC as well, since to the extent that a contract provision contradicts an applicable statute, that contractual provision will be rendered null and void.

So, for example, take the typical contractual provision that “all monies paid will be retained by the developer as “liquidated damages.” Essentially, the amount of damages fixed must be reasonable ‘in light of actual or anticipated harm’ and a term fixing an ‘unreasonably large amount’ is void as a penalty. Therefore taking a contract, say with a 10% down payment, and then adding subsequent monthly payments, the sum total could easily become ‘unreasonably large,’ particularly in light of the quick turnaround on the use rights for which there has been a default, assuming (which I think is fair with an on-site sales team), that the interest will be promptly re-sold.

Another example of a UCC provision that may well change the way defaulted buyers are treated is as follows. The included references to the specific UCC provision is the actual textbook unadulterated Code provision number, and may well differ from numbered state specific statutes. The developer/secured party is under a duty to notify debtors of the disposition of collateral under UCC Section 9-611.[5] Further, the disposition must be done in a commercially reasonable manner.[6] Of particular importance, the secured party/lender is required to apply proceeds of any disposition to the underlying debt once expenses have been taken.[7] Also of notable significance is the duty of the secured party to pay the debtor any surplus which results from the disposition of collateral.[8] Additionally, the secured party/developer is liable for any damages caused by its failure to comply with Article 9.[9]

Stay tuned for future developments on our website as we begin to apply the theories and applicable state statutes referenced hereinabove.

[1] The Uniform Commercial Code (“UCC”), first published in 1952, has been enacted by most states throughout the United States for over 60 years. According to the American Law Institute, “[t]he UCC is a comprehensive modernization of various statutes relating to commercial transactions including sales, leases, negotiable instruments, bank deposits and collections, funds transfers, letters of credit, bulk sales, documents of title, investment securities, and secured transactions.” Uniform Commercial Code UCC, ALI.org, https://www.ali.org/publications/show/uniform-commercial-code/ (last visited August 28, 2017).

[3] The State of Florida has adopted its version of the UCC as codified by Florida Statutes Chapters 671 – 680.