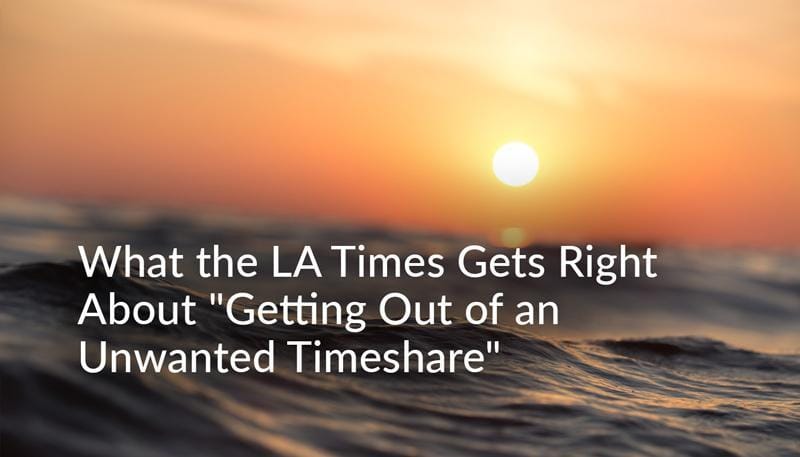 David Lazarus is an award-winning business and consumer protection columnist for the LA Times whose writing has been shared by publications across the country – and which has had some important, real world impacts for consumers.

So when Mr. Lazarus – who has been called “the best reason to read the LA Times” – takes on the thorny matter of terminating a timeshare contract, it’s worth it for consumers to pay attention.

As he recently wrote for the Times online:

“Undoubtedly there are some good timeshare arrangements out there, but I’m struck by how many people end up with buyer’s remorse and then struggle to untangle themselves.”

This assessment was born out of a recent appearance Mr. Lazarus made on KTLA 5 Morning News, in which he tackled a viewer’s question that wouldn’t be out of place in the Finn Law Group inbox: “How [do I] get out of a timeshare that’s not being used?”

So, what advice did Mr. Lazarus have to offer to this consumer who “doesn’t use” her timeshare and “can’t make the payments?” Let’s assess some of his most pertinent points:

“The resale value of timeshares is not very good”

As Mr. Lazarus points out, there is a resale market out there for timeshare interests – but the odds are that consumers who attempt to sell their own timeshare are “almost certainly going to have to take a hit.”

To wit? In our experience, it is not uncommon to see timeshare interests listed on resale sites, including eBay, for as little as a dollar or two, with the timeshare owner offering to cover all transfer fees and closing costs on the purchaser’s behalf. As our own Michael Finn once told Credit Card Guide:

“In the timeshare world, the seller pays the buyer. That speaks volumes about the value.”

What’s more, the deliberate and systematic suppression of the resale market on the part of major resort developers has created an environment that is unfriendly to consumers in other ways.

Specifically, given the lack of access and oversight, the timeshare aftermarket has become rife with scammers and con artists peddling the all-too-common timeshare resale scam, in which they offer to buy or sell a consumer’s timeshare interest for an upfront fee; after these fees are paid, the “seller” then drops off the face of the earth – or even tries to swindle the same poor timeshare owner twice!

Even among legitimate relief and redemption companies, consumers can expect little guarantee of success; in many cases, these organizations operate by means of exclusive inventory contracts with timeshare developers. Essentially, these companies collect timeshare interests and then offer them back to the resort developer. If a consumer’s interest is of little value to the resort, there is no certainty that it will be reacquired; in addition, many of these companies tend to come and go from the marketplace quite quickly, meaning that they may well not exist long enough to ensure that a so-called “money back guarantee” is honored.

What’s more, while all of this is going on, the owner will still likely be on the hook for maintenance fees (which tend to rise, year over year) and other costs associated with their timeshare – meaning that they’re likely losing money to their timeshare obligation even as they struggle to extricate themselves from it!

“Go to the company that runs the timeshare”

Mr. Lazarus makes a great point that reaching out to their resort should be a “first stop” for consumers; as he says, “frequently, they’ll have programs to take these things off your hands, but they’re not going to advertise it.”

He’s also fair in pointing out that “it’s going to cost you” – perhaps as much as a few thousand dollars.

Certainly, many resorts developers do have relief programs in place that are worth researching. Some of these programs have come under fire for high costs, long wait times, and subpar communication. Still, we agree that reaching out to your resort is a vital first step in beginning the process of contract termination.

“There are law firms that specialize in this sort of thing”

One way to bolster the efficacy of your resort negotiation efforts? Mr. Lazarus reminds consumers that there are law firms who specialize in the industry.

Here at Finn Law Group, we have achieved great success in assisting our clients with negotiating a mutually agreed-upon contract termination. As we have noted before, there are enormous benefits for consumers who retain the services of an attorney, who offer advantages above and beyond any of those that can be granted by an unlicensed, third party company.

For instance, it is only a licensed attorney who can present “strategic default” as a strategy to a consumer seeking leverage in a negotiation. Why? Under the Fair Debt Collection Practices Act (or FDCPA), third party debt collectors are legally prohibited from directly contacting a debtor (such as a timeshare owner withholding a resort payment) if that debtor has retained an attorney. Instead, the debt collector must contact the attorney, and may only continue to contact the consumer, if granted permission.

Similarly, only an attorney can utilize litigation effectively; law firms may also review and dispute contract clauses and/or advance legal principles and/or theories to enhance their ability to engage resort developers, in a way that no non-lawyer advocacy group or company may do without engaging in the unauthorized practice of law.

In all, we commend Mr. Lazarus for his brie but insightful overview of the challenges facing timeshare owners – as well as the potential solutions that are out there for consumers seeking relief.