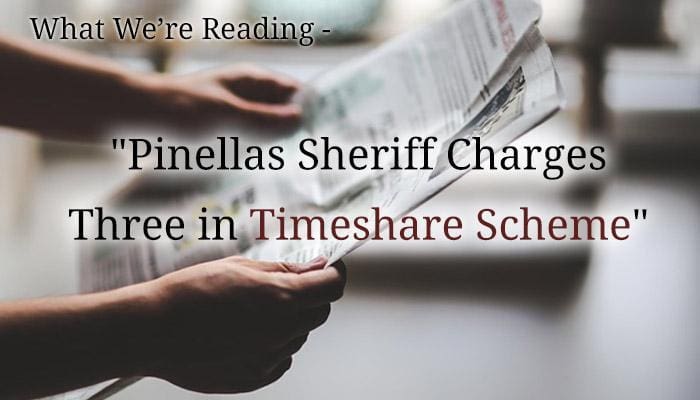 We’ve talked at some length before about the dangers of the timeshare resale scam, in which unsuspecting timeshare owners are tricked out of their money by scammers claiming to be involved in selling the victim’s timeshare.

Recently, three Florida men allegedly involved in such a scheme targeting consumers trying to sell timeshares were charged by Pinellas sheriff’s deputies, as reported by the Tampa Bay Reporter.

“Deputies say that, between January 2015 and November 2015, the three – Lyon, Black and Anderson – were involved in an organized scheme where they would call time share property owners who were trying to sell their properties. The three fraudulently represented themselves as attorneys for BB&T Bank and told the victims that they were assigned to handle the sale of their time share properties.”

Victims first reported in July of 2015 that they had been deceived into sending money via Money Gram as “pre-payment” for the alleged sale of their timeshare properties. Deputies said timeshare owners lost a total of $48,211 as a result of the alleged scheme, according to the Reporter.

For more on the story, we encourage you to read the full Tampa Bay Reporter article here, or learn more about the eight-month investigation via timeshare industry blog Inside the Gate here.

Unfortunately, this a story that is all too common in the timeshare world – and it’s yet another reason why consumers in Florida and around the country should take caution before dipping a toe into the timeshare resale market.

The FTC puts it well: “never pay for a promise.” Be wary of any offers to sell your timeshare quickly and for large amounts of money. Don’t be afraid to do some thorough vetting online and with the help of the Attorney General and consumer protection agencies in your state.