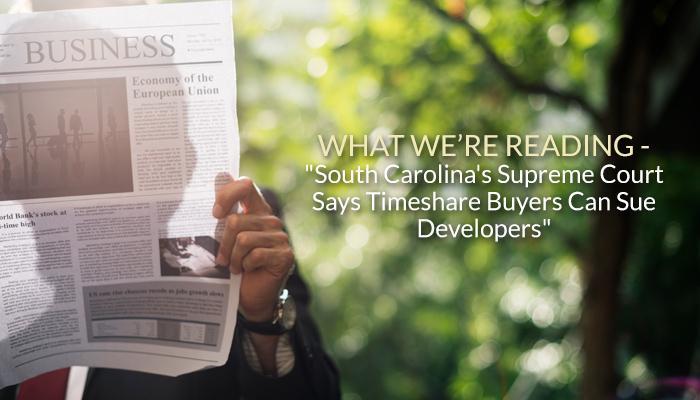 We’ve discussed several administrative remedies for consumers looking to raise a dispute over a timeshare company before; in South Carolina, another route for relief was recently reaffirmed – suing developers directly.

That exciting bit of consumer protection news comes to us from South Carolina’s The Post and Courier and Island Packet newspapers.

The state Supreme Court ruled, however, that commission oversight does not “preclude buyers’ rights to file civil lawsuits,” according to the Island Packet.

As reported in the Post and Courier, the court’s opinion originated from a dispute between a developer on Hilton Head Island and a group of timeshare buyers. As McDermott explains:

“A couple who had purchased an interest in the property sued the developer in 2015 over the company’s alleged failure to comply with the registration requirements spelled out in the S.C. Vacation Time Sharing Plans Act.

The Supreme Court was asked to certify three questions about the jurisdiction of the Real Estate Commission in those kind of disputes. In each instance, it determined that timeshare buyers in South Carolina have the right to bring private lawsuits, saying the language in the law is clear and unambiguous.”

According to the Island Packet, this unanimous decision from the Supreme Court will allow an “estimated 100 lawsuits filed against two Hilton Head Island timeshare companies to go forward,” after being “stalled for more than five years” in some cases, according to attorneys representing the timeshare buyers.

For more on this decision, including the reactions from the timeshare developers, we encourage you to read the full articles over at the Post and Courier and Island Packet.

What rights do you have in a dispute with your timeshare company? Have any other questions or concerns?