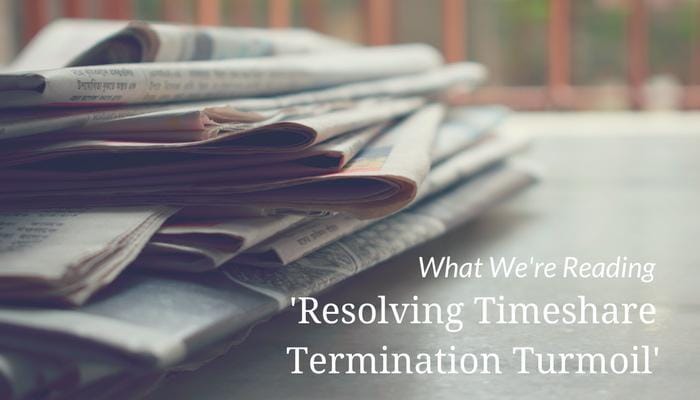 Recently, NBC Boston ran a story entitled “Resolving Timeshare Termination Turmoil,” a piece well worth checking out for anyone who may be curious about the oft-tricky process that awaits consumers ready to get out of their burdensome timeshare obligations.

The piece – which you may read or watch here – tells the story of one Nick Anastos, who bought a timeshare in Kissimmee, Florida back in 1990.

While Anastos and his family were loyal owners, he tells NBC Boston, the obligation of paying “expensive yearly fees” eventually became more than he could handle.

Meanwhile, the concept of resort ownership no longer fit into his lifestyle. As he explains it:

“It was ideal when our children were younger. But as we got older, you know, it wasn’t our cup of tea anymore. So we stopped going there.”

So Anastos began searching for a way to get out of his timeshare commitment. In 2015, he says, he approached one third-party company offering timeshare termination services. As he tells NBC Boston:

According to the report from NBC, he paid the company nearly $5,000, partially because he was made confident by its promise to refund his upfront payment should they fail to transfer his interest.

Eventually, the NBC report explains, Anastos was contacted by his resort company, which informed him that they would not be dealing with his third party relief company and that his best course of action was to interface with the resort company directly to end his agreement.

Even after bringing this correspondence to the third party relief company’s attention, Anastos says, he was unable to convince them to refund his money – until he finally reached out to NBC Boston’s consumer protection unit for assistance.

In all, this story is a potent reminder of the many difficulties that can face timeshare consumers who are looking to terminate their contracts, be it for financial or personal reasons.

It’s all-too-common to hear stories just like this, full of questionable resale companies, less-than-responsive timeshare resort companies, and a palpable sense of consumer desperation – so strong that it sends many directly into the arms of scammers and con artists.

For more on the various types of timeshare relief organizations out there, we encourage you to read what our own Michael Finn has to say about “The Real Deal on Timeshare Relief Companies,” here. For the full NBC Boston report, including video, we encourage you to check it out here.