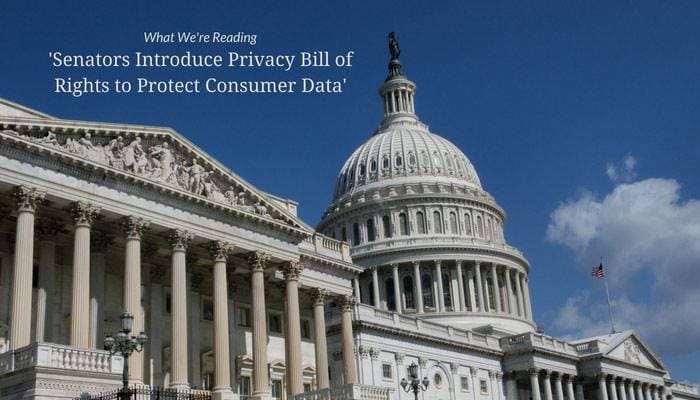 Stories about data privacy and protection have been all over the news in 2018 – and for good reason.

As consumers increasingly worry about how they can best safeguard their most personal information when surfing the internet, making purchases, or even logging in to their social media accounts, Congress is taking some first steps toward securing individuals’ private data from prying eyes.

Around the same time that Facebook CEO Mark Zuckerberg took to Capitol Hill to discuss privacy, data mining, and social media, a group of senators introduced a piece of legislation that takes aim at preventing future situations like the Cambridge Analytica incident (in which a company applied questionably-obtained data to target millions of internet users during the 2016 presidential election).

The bill has been called a privacy “bill of rights.” Officially, the legislation is known as the Customer Online Notification for Stopping Edge-provider Network Transgressions (CONSENT) Act.

In the broadest terms, the CONSENT Act would “require the Federal Trade Commission (FTC) to establish privacy protections for customers of online edge providers like Facebook and Google,” as Robin Kurzer explains over at Marketing Land.

As Digiday explains, this new privacy bill is modeled after European privacy standards, and would establish rules requiring “publishers, platforms, brands and anyone else collecting people’s information online” to:

“obtain a person’s explicit consent before they can use, share or sell certain information about that person. They would need to detail all the ways that information is used, shared or sold, and notify people when those ways change ‘in a significant way.’”

The bill would also “add new security and breach reporting requirements,” according to a report The Verge.

It remains to be seen if the CONSENT Act, which was introduced by two Democratic senators, will be able to gain traction in Washington. As Marketing Land points out, “US law has stayed mostly silent,” on data issues, “with no federally mandated laws governing the general collection and use of consumer data on the books at this time.”

Still, data privacy and social media regulation are important matters for consumers on all sides of the aisle – and the progress of this bill may well be an important story worth continuing to follow in the months ahead.

For more context and information, you may peruse the full text of the act, which is available here. For statements from the senators behind the bill, a press release on the CONSENT Act can be found here.

And, if you’re interested in learning about the European Union’s General Data Protection Regulation (GDPR), a sweeping legislative change set to go into effect in May and which inspired the CONSENT Act, you may discover more on the subject here.