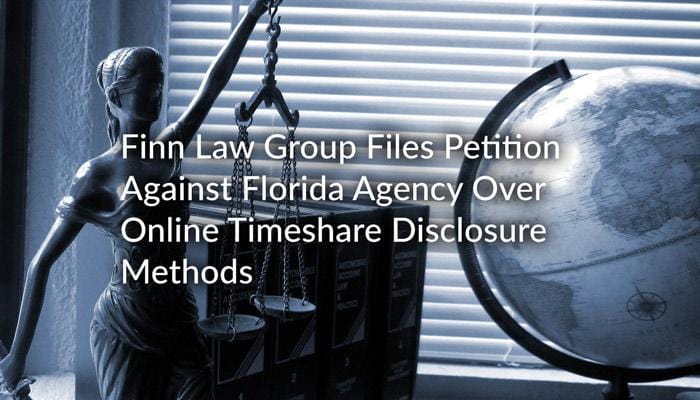 LARGO, Fla.– An administrative petition has been filed against Florida’s Department of Business and Professional Regulation alleging that the agency’s approval of a request by timeshare developers to make statutorily mandated public offering statements available by providing an online address at the closing, rather than furnishing hard copies, violates Florida law.

The suit, Rudisill, et al. v. Department of Business and Professional Regulation, case no. 17-4868RU, was filed August 28 in the Division of Administrative Hearings, State of Florida. The petition seeks an order declaring the agency’s approval of alternative media delivery of the required documents an invalid exercise of legislative power. The suit asks for suspension of the approval, as well as an award of costs and attorneys’ fees.

“The legislature requires timeshare developers to provide a packet of essential consumer information to purchasers at the closing. Because DBPR now allows developers to provide a website address instead of paper and ink that purchases can read immediately, the information’s urgency and impact are diminished. Consumers only have ten days to rescind a timeshare contract and push the disclosures online, to be read at later, artificially reduces the rescission time.”

The Finn Law Group, which has offices in Florida, represents consumers in timeshare and related real estate matters. For more information, contact Michael D. Finn by calling 855-346-6529 or by reaching out via email, michaeldfinn@finnlawgroup.com.