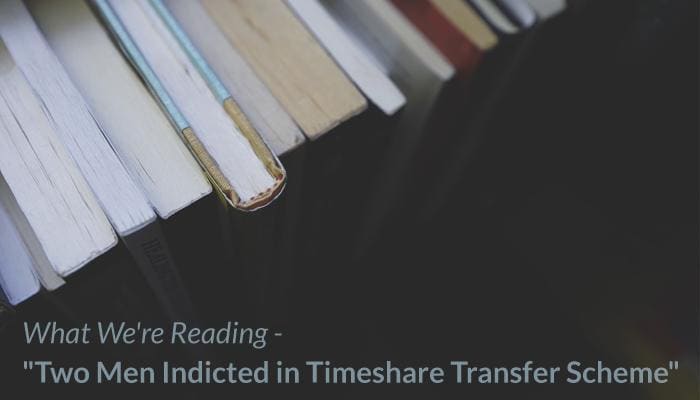 Elderly Americans comprise one of the timeshare industry’s biggest demographics; their disposable income and dreams of traveling in retirement make them prime candidates for vacation sales. But what happens when the older generation grows tired of the timeshare grind? They try to sell, cancel, or transfer their obligation.

Today, some seniors can proceed in this endeavor a little more safely, after a recent indictment from a Boulder, Colorado grand jury of two men accused of running “a timeshare scheme that targeted elderly people across the U.S. over the past two years,” according to the Boulder Daily Camera.

As the Camera’s Mitchell Byars reports:

“Kristopher Chavez was indicted on two counts of violating the Colorado Organized Crime Control Act as well as 47 other counts that include theft of various amounts and criminal impersonation and was taken into custody… A warrant has been issued for a co-defendant, Timothy Hatcher, though his indictment remains under seal.

The two COCCA violations — one for racketeering the other for conspiracy — are both Class 2 felonies punishable by eight to 24 years in prison.”

According to the indictment, Chavez, Hatcher, and other “persons unknown” operated their fraud scheme from 2014 through September of 2016.

As the Daily Camera reports, Hatcher would reach out to timeshare owners across the U.S. claiming to be an account manager with a company called Immediate Acquisitions/Timeshare Transfers, or Properties Exchange. He would invite those owners to a seminar at a hotel, where “he would pitch a proposal wherein the owners would pay a one-time fee to transfer ownership of their timeshare.”

“Once the payment was made,” Byars writes,

“the owners would be referred to Chavez — operating under the alias Chris Culhane — to transfer the title out of their name as well as sign paperwork appointing a third party as the “attorney-in-fact” for the transfer.

But according to the indictment, the owners later discovered that their timeshares had not been legitimately transferred and that they were still liable for homeowners association and maintenance fees. Because they had named a third party as the attorney for the transfer, many of these owners never received the notifications that they owed payments.”

For more on this case, we encourage you to read the full report here.