The Unconscionable Suppression of the Timeshare Resale Market 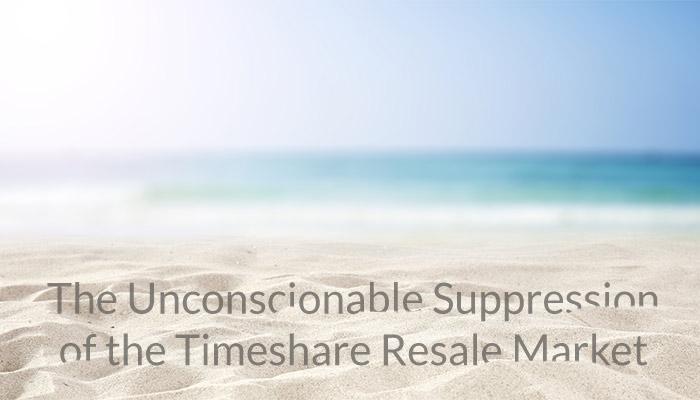 Not long ago, I was stopped at a red light in my four year old, four-door sedan, when a sporty convertible pulled up alongside me, and stopped for the light. Envious, I imagined myself at the wheel of the convertible, and as I pulled away on the green, I began to plot. “As an empty nester,” I rationalized, “there’s no reason I can’t have a new convertible. My wife has an SUV, why do I need four doors?”

I promptly drove over to the dealership where I had bought my sedan four years ago, and got a decent trade-in offer towards a new convertible.

Not completely satisfied with the price offer, I stopped at another dealer who bought cars outright without a trade-in and learned about the Kelley Blue Book, which has been publishing the value of all vehicles since 1926. Utilizing my new expertise, I advertised my sedan online and in the local paper, and sold it to a private buyer for an even better price than I had been quoted at the dealership.

While driving off in my sporty new convertible I began to think about my fully paid for three-bedroom “lockout” timeshare interest my wife and I had owned for years. Now that just the two of us vacationed together, I thought that we could downsize into a one-bedroom unit, which would save some money on maintenance fees, and, using the trade-in value of the timeshare, maybe even allow me to make some money.

What a shock I received at the resort. Not only couldn’t I do a like for like trade of my three-bedroom lockout for a smaller unit, they said I would be lucky to get a $5,000 trade in allowance on a $23,000 one bedroom unit. When I told them to just cash me out of the existing timeshare, they told me they didn’t take units back. When I asked them how I could walk away from my unit, they referred me to an outside non-affiliated “reseller” who wanted an upfront fee to help me sell my unit.

How, I asked myself, did I have no problem getting about 55% of the purchase price of my four year old car back, but can’t get anything for a three-bedroom, paid-off timeshare that had been recently remodeled?

So what’s the difference between a used car and a used timeshare? Value.

Although my illustration is fictional, the facts presented herein are accurate. The purpose of this illustration is to analyze how a continuously maintained large timeshare unit in a nice resort did not retain its “value” when a four year old sedan with over 50,000 miles on it could be easily resold in the secondary vehicle market with a recovery of over half of its original cost. Although the car and the timeshare are not comparable in all respects, there are some valid points of comparison;

One would, all things being equal, anticipate a moderate to healthy aftermarket value for each. Why then the cavernous disparity in value between the two? There are relatively healthy secondary markets for many consumer products and next to none for timeshares.

The principal reason that I’ve been able to discover that accounts for this major disparity, is the difference in behavior of the product manufacturers and original distributors as compared to the conduct of many, if not most, timeshare developers. To go back to our vehicle comparison, nearly every new car dealership you’ll encounter has, immediately adjacent to its new car showroom and lot, a used car facility of comparable quality and presentation. Independent used car-only dealerships have close relationships with vehicle auction houses as well as other used car lots. Comparable side channel relationships also exist in the boat and camper industries.

Compare that if you will, to the timeshare industry’s tightfisted control of their markets, where no viable secondary market is permitted to exist, let alone thrive or prosper, and you begin to understand the complexity of the issue.

How anti-resale is the timeshare industry?

To obtain the facts to support this argument, I had only to go directly to the source, the presented statements of the timeshare developers themselves.

Specifically, each and every one of the timeshare developers who file documents with the Securities and Exchange Commission to support their public filing requirements have included language in each of their filings that specifically addresses the secondary resale market as a threat to their bottom line. I’m not in any manner exaggerating or embellishing the characterization of these statements. To borrow a direct quote from Bluegreen’s SEC filing, “The resale market for VOIs [vacation ownership interest] could adversely affect our business” is the title line to a paragraph within their filing.

Similar incendiary, anti-secondary market language is found throughout the filings for other resort developers, as well. (We can supply the relevant SEC web pages upon request). It is amply clear that these developers, in their own words and in their own public filings, all express open antagonism to the very existence of a secondary timeshare resale market!

In summary, these developer resort SEC filings conclusively establish that even simply stepping out of the resale channel and permitting other market forces to come in to help stabilize the resale timeshare marketplace without interference from the developers is not an option to be considered, clearly because of the perceived threat to their bottom line.

What are the long term effect of this stifled resale market?

Is the resort development industry’s reasoning justified? After all, if a reseller is selling the identical product at a price that is considerably below what the developer is charging, that actually isn’t good for the developer’s bottom line, correct?

If at first blush the position seems justifiable, it is nothing if not terribly short sighted.

Starving the resale market may initially be good for the bottom line but at what long term cost? For example, what about the developer’s loyal timeshare buyer’s longer term economic health? At some point, that loyal owner is going to be facing an issue probably not even contemplated during the initial timeshare acquisition process. That buyer will, over some period of time, some sooner than others, get laid off or lose their job, get divorced or otherwise lose their spouse, become sickly or disabled, or die. What happens next in the absence of a structured secondary resale market?

What if that triggering event happens sooner rather than later and there is still a significant mortgage balance due to the developer? What if, balance or not, the developer refuses to take back the interest, leaving ongoing and rising maintenance fees running? Legally that owner remains personally liable for those fees, despite the fact that they purchased the timeshare at full retail cost and supported the resort as long as they could afford to. What position does the resort take when confronted with that issue?

How about the fact that the resort personnel often will then recommend the services of a so called “resale company” who will, more often than not, require an upfront fee to “list” the interest on a website where no one can accurately determine who will see it?

Do we now add to our list of developer sins a complete absence of appropriate social (if not legal) responsibility to our accusation of shortsightedness? Whether or not the industry will admit even just standing by passively and knowingly allowing its commissioned salesmen to infuse value into the purchase, there can be no denying that the assumption purchasers instinctively make at time of purchase is that being a real estate based product, their interest will, over time, tend to hold its value, if not outright increase!

Timeshare industry, your position is not only short sighted and socially irresponsible, it’s not sustainable! Those of us who occupy the timeshare sector of the economy alongside of the developers are keenly aware that the industry itself, through ARDA, its trade organization, knows that the industry must make consumer friendly changes to its marketing practices to ensure its long term survival, but somehow this tiny shrill voice gets swept aside and lost as industry profits and sales continue to rise. “Hey, nothing’s broken, so what’s the hurry trying to fix this?”

A strong resale market will strengthen the industry

I would argue that there is no better time than now to make the important and essential changes that might, in the short term, slow down profitability, but in the long term, turn the timeshare industry into a more socially responsible and far more sustainable industry for decades to come.

Instead of shunning the secondary market, embrace it; invest some of your profits into stabilizing the resale market. Take the lesson the auto, boat and camper industries learned long ago, that a healthy resale market is essential to the entire industry, that from beginning to end there must be a continuous flow, a circle of economic life, if you will.

If you can’t set up a used timeshare lot across the street from your project, at least sponsor knowledgeable licensed real estate brokers well offsite so as not to compete directly with your retail operations. Sure, you’ll lose some initial business to these brokers, but by indirectly supporting them, you’ll make timeshare interests affordable to the folks who really can’t afford to buy retail, but can perhaps afford to repurchase the interest of your newly divorced initial purchaser (something that you arguably owed the poor guy anyway). More importantly perhaps, you will be able to support the continuing financial health of the resort via the annual maintenance payments now to be made by the new owner, and ever crucial to the future of the resort you built and developed.

Timeshare developers should take a hard look at themselves and their industry. Take pride, not just profit, from making family vacations an affordable part of the American lifestyle by opening up that opportunity to even more folks.