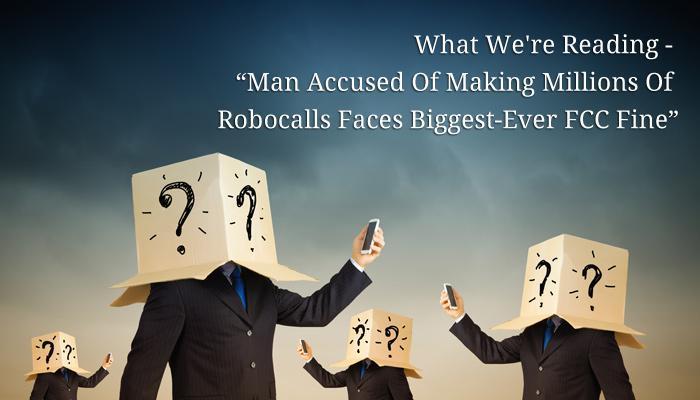 Officials from the Federal Communications Commission (FCC) have identified “the perpetrator of one of the largest … illegal robocalling campaigns” in history, according to NPR, and the Miami resident singled out could face up to $120 million in fines.

According to the FCC, one person – identified as Adrian Abramovich – may be responsible for auto-dialing hundreds of millions of landlines and cell phones in the U.S. and Canada. According to NPR, “almost 97 million robocalls” took place “over just the last three months of 2016” alone, and the volume at one point was great enough to “overwhelm an emergency medical paging service.”

So how did these robocalls work? According to the FCC, the robocalls were made through several ambiguously named companies and would show up as “spoofed,” or, as Alina Selyukh explains for NPR, made to look “as if they came from a phone number with the same area code and the same first three digits of the recipient’s number.”

“If the recipients answered, they’d get a recording offering an “exclusive” vacation deal from prominent travel companies such as Expedia, Marriott, Hilton or TripAdvisor — instructing them to “Press 1” to learn more. But pressing 1 would instead land people on a line with a call center hawking “discounted” vacation packages and timeshares unaffiliated with any of those brands.

According to FCC documents, TripAdvisor investigated some of the robocalls that purported to offer that company’s deals and found call centers that it said were based in Mexico.”

The alleged robocaller must now respond to the FCC, which “is expected to finalize the investigation and penalties in the following months,” according to NPR. The proposed multi-million dollar fine is the largest ever from the FCC, and the agency’s Enforcement Bureau has also issued a citation stating that his “mass robocalling campaigns violate the Communications Act, and his misrepresentations in the prerecorded messages constitute criminal wire fraud.”

For more on this case, we encourage you to read the full report from NPR or peruse the FCC’s citation and order, available on the agency’s website.